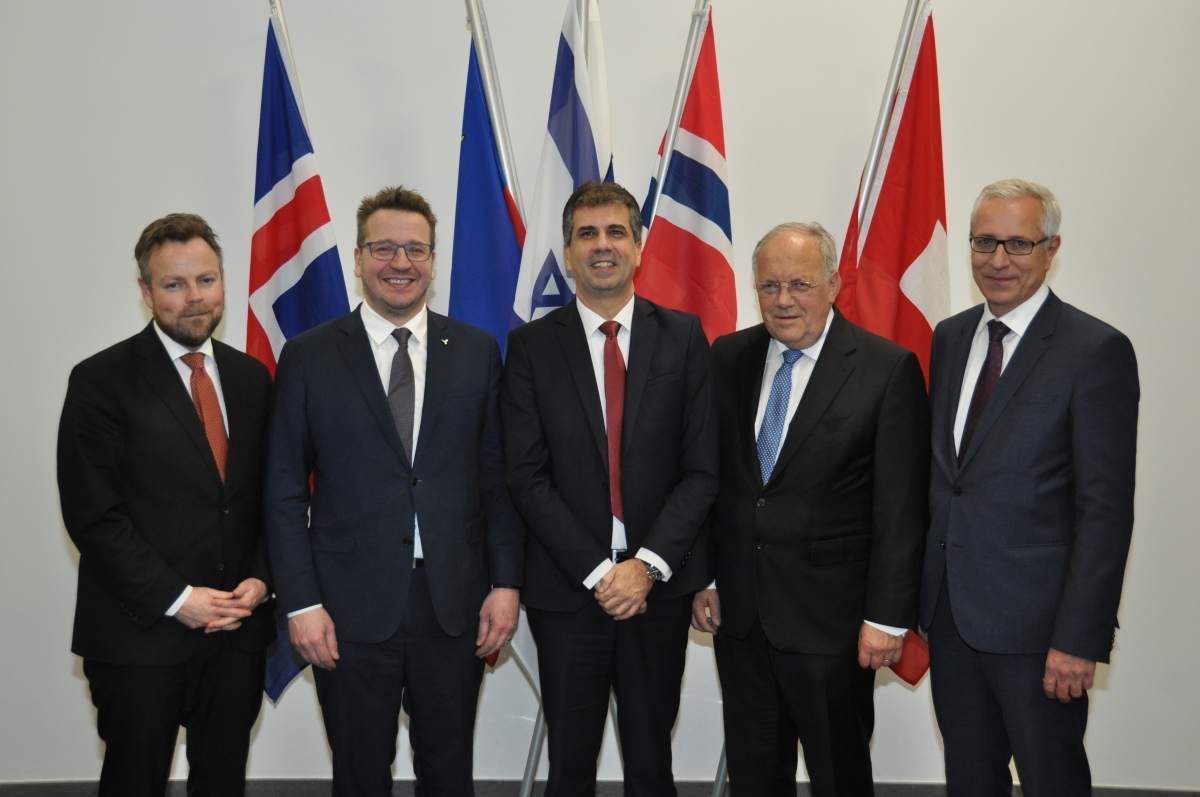 After the signing of the agreements, from left: Torbjørn Røe Isaksen, Minister of Trade and Industry of Norway, Guðlaugur Þór Þórðarson, Minister for Foreign Affairs and External Trade of Iceland, Eli Cohen, Minister of Trade and Economy, Israel, Johann N. Schneider-Ammann, Federal Councillor and Head of the Federal Department of Economic Affairs, Education and Research of Switzerland, Henri Gétaz, EFTA Secretary-General.
Ministers from Member States of the European Free Trade Association (EFTA) – Iceland, Norway and Switzerland – and from Israel, signed revised bilateral agricultural agreements on 22 November 2018 in Geneva, Switzerland. Through the signing, both sides commit to further strengthening their trade relations in the field of agriculture.

The bilateral agreements were signed by Eli Cohen, Minister of Trade and Economy, Israel, and Guðlaugur Þór Þórðarson, Minister for Foreign Affairs and External Trade of Iceland, Torbjørn Røe Isaksen, Minister of Trade and Industry of Norway and Johann N. Schneider-Ammann, Federal Councillor and Head of the Federal Department of Economic Affairs, Education and Research of Switzerland respectively. The bilateral agricultural agreement between Switzerland and Israel will also be applicable to Liechtenstein by virtue of the Swiss-Liechtenstein Customs Treaty of 1923.

Economic relations between the EFTA States and Israel

Trade between EFTA and Israel amounted to 1.8 billion Euros in 2017, which is an increase of 20 percent in the last five years. Out of this, USD 150 million (4.7%) was achieved by trade in agricultural products. EFTA’s main exports to Israel were coffee, tobacco, cocoa and different food preparations. Remarkably, export of coffee products has doubled between 2012 and 2017, export of chocolate products has grown by around 25% during this time whereas animal feeding products were exported for almost USD 1 million in 2017 compared to USD 30’000 in 2012. The EFTA States have been increasingly importing fruits and nuts from Israel, mostly citrus fruits, mangoes and guavas. Israel is EFTA’s 20th largest export market.

"This is very promising, and we are convinced that the revised agreements we are signing today will create additional opportunities for both Israel and the EFTA States," said Johann N. Schneider-Ammann, who Chairs the EFTA Ministerial meeting in Geneva on 23 November.

Further information on EFTA-Israel trade can be found with the EFTA Trade Statistics Tool.

EFTA’s global network of preferential trade agreements outside the EU now consists of 28 agreements with 39 partners. Six joint declarations of cooperation (JDCs) complement this network. Over 12 percent of EFTA’s total exports go to these trade partners and they are the source of 7.5 percent of EFTA imports. In 2017, EFTA’s global trade accounted for USD 766 billion, 43.5% of which was with countries outside the EU.