The EFTA Council is the highest governing body of EFTA. The Council usually meets eight times a year at the ambassadorial level (heads of permanent delegations to EFTA) and once a year at ministerial level.

In the Council meetings, the delegations consult with one another, negotiate and decide on policy issues regarding EFTA. Each Member State is represented and decisions are taken by consensus.

The Council discusses substantive matters, especially relating to the development of EFTA relations with third countries and the management of free trade agreements, and keeps under general review relations with the EU third-country policy and administration. It has a broad mandate to consider possible policies to promote the overall objectives of the Association and to facilitate the development of links with other states, unions of states or international organisations. The Council also manages relations between the EFTA States under the EFTA Convention. Questions relating to the EEA are dealt with by the Standing Committee in Brussels.

Here you can find a list of Council Decisions amending the EFTA Convention since 2001.

Committee structure under the Council

Under the Council, a substructure of committees has evolved to deal with special issues (see figure). The Committee on Third-Country Relations oversees the functioning and development of free trade and cooperation agreements with third countries. The Committee on Customs and Origin Matters oversees cooperation in the customs field, particularly in relation to free trade agreements. The Committee on Technical Barriers to Trade advises the Council on standardisation policy, conformity assessment policy, relations with other European quality infrastructure organisations and international aspects of technical regulatory work. The Budget Committee assists the Council in matters related to the EFTA budget. The EFTA Board of Auditors acts as the supreme auditing authority for the EFTA Secretariat, the EFTA Surveillance Authority and the EFTA Court. In addition, it also functions as a contact point for the European Court of Auditors regarding the control and auditing of EEA EFTA contributions to the Community budget.

The Consultative Committee provides a forum for representatives of industry and labour in the EFTA States to exchange views among themselves and with the Council, while the Parliamentary Committee provides a forum in which MPs of the EFTA States can discuss issues of concern among themselves and, twice yearly, with EFTA ministers. The management and development of EFTA's free trade agreements and declarations on cooperation are carried out through joint committees with each of EFTA’s third-country partners.

Additionally, several committees in specialised fields are set up under the EFTA Convention. 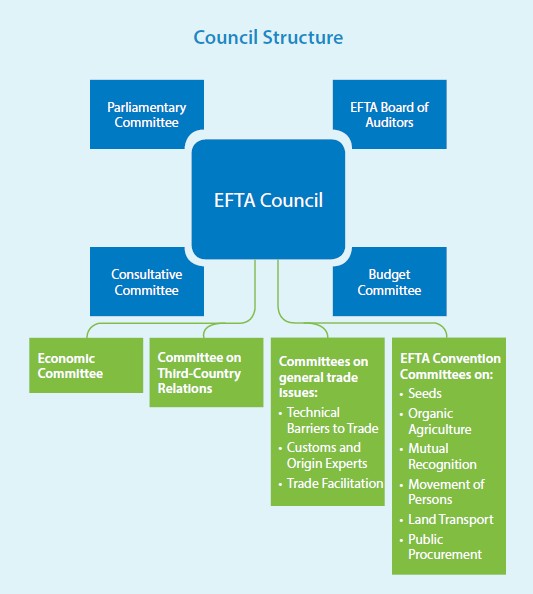