EEA Joint Parliamentary Committee meets for the first time in 2021 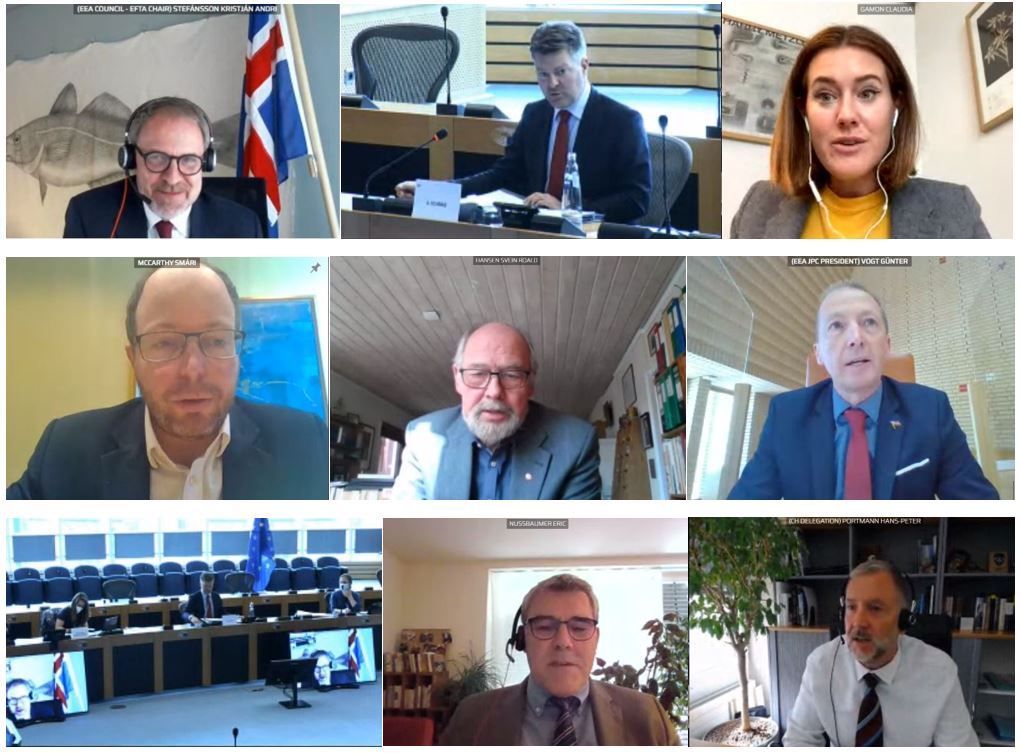 On 28 April 2021, the EFTA Parliamentary Committee met jointly with the European Parliament in the format of the EEA Joint Parliamentary Committee (EEA JPC). Members discussed the latest developments in the EEA which is being challenged by the unprecedented economic crisis related to the COVID-19 pandemic and the departure of the United Kingdom from the EU and the EEA.

Following the parliamentary elections that took place early February in Liechtenstein, Mr Vogt introduced himself and his colleague Daniel Seger to the Committee members. “As you might know, the EEA Agreement is of central importance for Liechtenstein as a small and export-orientated economy. It provides stable and predictable conditions to Liechtenstein companies and offers numerous opportunities to access the European market worth a population of 450 million people”, he said. He also emphasised the importance of a well-functioning EEA Agreement which will constitute a key engine to recovery.

Ambassador Stefánsson explained that EEA EFTA States had been taken by surprise when the amended Commission Regulation adopted in March had removed EEA EFTA States from the list of countries exempted from the export authorisation scheme of COVID-19 vaccines. “Iceland and Norway made a conscious choice based on their participation in the Internal Market to procure their vaccines exclusively through the Advance Purchasing Agreements of COVID-19 vaccines”, he said. “EEA EFTA States stand firm that the current export authorisation scheme is incompatible with the EEA Agreement”, he added.

The EEA JPC members subsequently adopted a resolution on the Annual Report of EEA Joint Committee on the functioning of the EEA Agreement in 2020. Mr Günter Vogt, co-rapporteur for the resolution, underlined in his statement three important issues: the lower incorporation rate of legal acts in 2020 leading to an increase of the backlog; the importance of a fast incorporation of Joint Committee Decisions on the participation of EEA EFTA States to EU programmes; and the rule of law conditionality  to allocate grants under the EEA Financial Mechanism. Referring to a proposed amendment by a Committee Member he stressed that “European values, independent institutions, and the rule of law are prerequisites for funding under the EEA financial mechanism now and in the future”.

EU and EFTA Parliamentarians then discussed Internal Market cooperation during the COVID-19 pandemic. Ms Claudia Gamon, Member of the Committee Internal Market and Consumer Protection (IMCO) and Vice-Chair of the D-EEA presented the main findings of a resolution of the European Parliament on this topic.

“The national measures taken at the beginning of the pandemic have violated the basic general principle of cooperation in the Internal Market and the EEA, especially the free movement of people but also of goods and services. This has been particularly felt by people living in border regions across the EEA. It has not only affected the normal functioning of the economy but has also strained relations between individual countries”, she said. “We will need now and once we get through the pandemic an even stronger cooperation than before to recover our economies, build back better and be stronger than before”, she added.

Finally, the EEA JPC members discussed another overwhelming challenge for the Internal Market and the EEA: the relations of the EU and the EFTA countries with the United Kingdom. Ms Gwendoline Delbos-Corfield, Substitute Member of the UK Coordination Group in the European Parliament outlined her views about the upcoming challenges relating to the implementation of the EU-UK Trade and Cooperation Agreement (TCA) and its impact on the EEA.

The EEA Joint Parliamentary Committee is a joint forum composed of members of the national parliaments of the EEA EFTA States and Members of the European Parliament (MEPs). Its mandate is to contribute – through dialogue and debate – to a better understanding between the EU and the EFTA States in the fields covered by the EEA Agreement.

The meeting was live streamed on the website of the European Parliament. The recording is accessible under the following link.