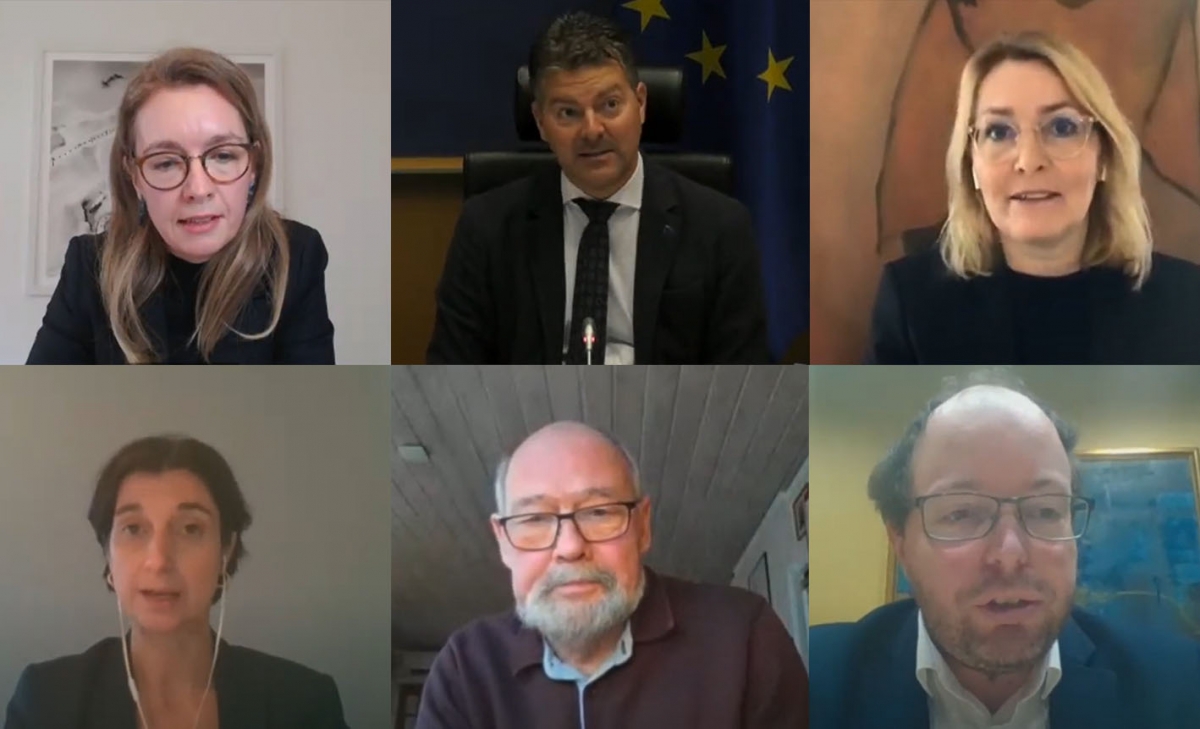 On 16 November 2020, the EFTA Parliamentary Committee met jointly with the European Parliament in the format of the EEA Joint Parliamentary Committee (EEA JPC). Members discussed the latest developments in the EEA which is being challenged by the unprecedented economic crisis related to the COVID-19 pandemic and the departure of the United Kingdom from the EU and the EEA.

“Over the last 8 months, there have been many examples of how important our cooperation is. Together, we have repatriated our nationals stranded abroad. We have swiftly incorporated urgent COVID-related acts into the EEA Agreement. And there has been much cooperation between the EU and the EFTA side on the development and acquisition of health equipment and medicines, including the search for a vaccine”, Ambassador Monauni said.

The EEA JPC members subsequently adopted a resolution on the Annual Report of EEA Joint Committee on the functioning of the EEA Agreement in 2019. Mr Svein Roald Hansen, co-rapporteur for the resolution, welcomed the fact that in 2019 they had reduced the so-called backlog so that an important number of legal acts outstanding had been incorporated into the EEA Agreement. Noting that this positive trend seemed to lose pace in 2020, he opined that it was “crucial that enough resources are allocated both on the EFTA and the EU side to process the incorporation of acts in order to avoid legal acts piling up again as we have experienced in the past”.

On the issue of the backlog, Ambassador Monauni noted that it has been growing because of an administrative bottleneck on the EU side. “We therefore call on the EU side to implement necessary measures to address their capacity limitations, both in the short term and the long term,” she said.

Internal Market in time of crisis

EU and EFTA Parliamentarians then took stock of the state of the Internal Market in crisis time. Mr Hubert Gambs, Deputy Director-General of the Directorate for Internal Market, Industry, Entrepreneurship and SMEs (DG GROW) of the European Commission outlined the measures taken to come back to a fully functioning Internal Market. He stressed that: “Our single market is undoubtedly our best anti-crisis weapon and therefore we need to boost it in the future to sustain the recovery of our economies”.

Ms Christel Schaldemose, Member of the Committee on the Internal Market and Consumer Protection (IMCO) said that “the European Parliament has been a key actor in upholding the Internal Market by pushing for borders to remain open and goods to continue to circulate throughout the EEA while at the same time preserving the rights of consumers.” Looking at the future, she said that we would be committed to create a “more resilient internal market by harnessing the full potential of the green and digital transition”.

Finally, the EEA JPC members discussed another overwhelming challenge for the Internal Market and the EEA: the future relations of the EU and the EFTA countries with the United Kingdom. Ms Gwendoline Delbos-Corfield, Substitute Member of the UK Coordination Group in the European Parliament briefed the members about the state of play and outlook of the negotiations between the EU and the UK. One representative of each EFTA parliamentary delegation made a statement on EFTA’s future relations with the UK, from the perspective of their respective country. This was followed by an exchange of views on the matter.

The EEA Joint Parliamentary Committee is a joint forum composed of members of the national parliaments of the EEA EFTA States and Members of the European Parliament (MEPs). Its mandate is to contribute – through dialogue and debate – to a better understanding between the EU and the EFTA States in the fields covered by the EEA Agreement.

The meeting was live streamed on the website of the European Parliament and on the EFTA Youtube channel:

Recording on the EP's website is accessible under the following link.