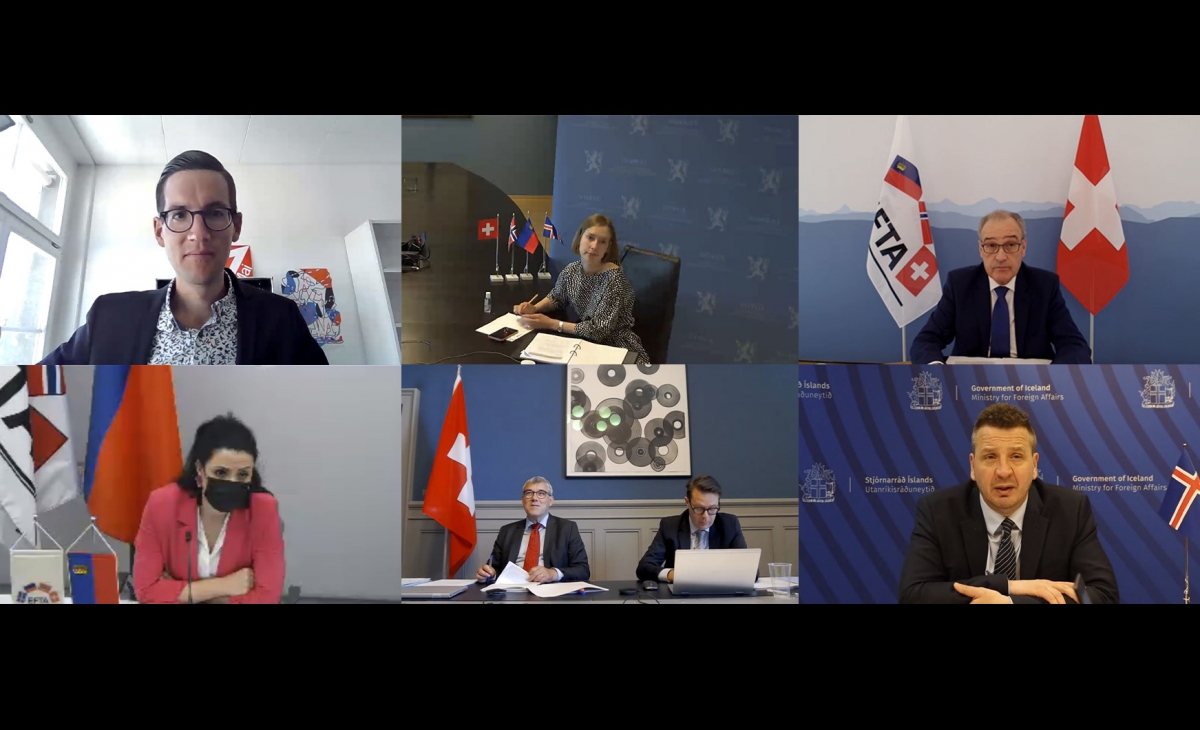 On Monday 31 May 2021, on the margins of the EFTA Ministerial meeting, the EFTA Parliamentary Committee (EFTA PC) and the EFTA Consultative Committee (EFTA CC) met online with EFTA Member States’ ministers.

The Ministerial Chair, Iselin Nybø, briefed the Committees about the latest developments regarding sustainability in EFTA free trade agreements. She stressed that working groups had been established to develop an instrument to monitor the compliance of trade and sustainable development provisions by EFTA third-country partners as well as to assess the prospects of undertaking sustainability impact assessments of future EFTA free trade agreements.

Reto Wyss stressed that “In the recent months and years, it has become apparent that the public is becoming more and more interested and aware of trade-related issues and their real-life impact”.

Eric Nussbaumer outlined concrete proposals on how to further increase transparency of EFTA third-country operations. He stressed: “Taking stock of the recent political campaign in Switzerland on the ratification of the agreement with Indonesia, I assume we all agree on the importance of reaching out to parliamentarians, civil society circles and the general public to explain the relevance and importance of these agreements for the prosperity of EFTA States.”

Members of the EFTA advisory bodies and ministers also exchanged views about various ongoing processes and negotiations with third-country partners, relations with global actors such as China and the US as well as the state of play of the negotiations between the EEA EFTA States and the UK on a free trade agreement.

The President of the Swiss Confederation, Federal Councillor Guy Parmelin, briefed the Committees about the recent decision of the Swiss Government to terminate the negotiations between Switzerland and the EU on an Institutional Framework Agreement. The consequences of such decisions were discussed at large.

The EFTA PC and the EFTA CC are EFTA advisory bodies. The EFTA PC is a forum of parliamentarians from the four EFTA countries, while the EFTA CC brings together representatives of the trade union confederations and employers’ associations in the four EFTA countries. The mission of both advisory bodies is to scrutinise and provide advice on the EFTA States trade relations with third countries as well as on the relations with the EU through the implementation of the EEA Agreement. Both advisory bodies are vital platforms for dialogue and consultation on social, economic and political aspects of the EFTA free trade agreements and the functioning of the EEA.