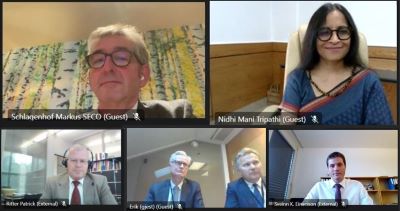 Ambassador Markus Schlagenhof, Delegate of the Federal Council for Trade Agreements and head of the World Trade Division at the Swiss State Secretariat for Economic Affairs, acted as the EFTA spokesperson while Ms Nidhi Mani Tripathi, Joint Secretary at the Indian Ministry of Commerce and Industry, headed India’s delegation.