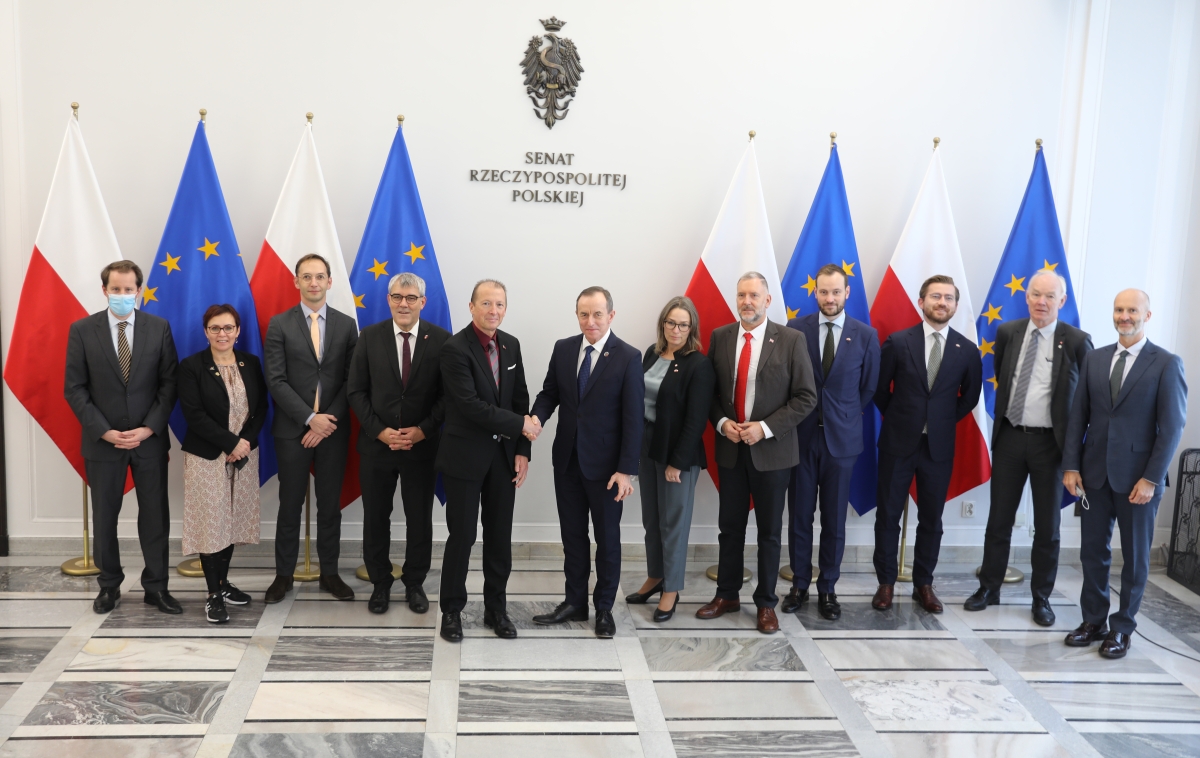 EFTA parliamentarians in the Senate of Poland.

The Committee of Members of Parliament of the EFTA States undertook on 25 and 26 November 2021 a delegation visit to Poland to discuss the EEA and Norway Grants cooperation and the rule of law situation in this country.

The delegation discussed with Małgorzata Jarosińska-Jedynak, State Secretary at the Ministry of Development Funds and Regional Policy, the achievements of the EEA and Norway Grants in Poland as well as prospects for the future cooperation ahead of a possible fourth programming period for 2021-2028.

“Overall, the EEA and Norway Grants are a success story. Since the accession of Poland to the European Union in 2004, EEA EFTA States have contributed by almost EUR 2 billion to foster research, innovation, education, to fight youth unemployment, to build capacity in various areas, and to prepare Poland for the Green transition. A lot has also been done to promote local development, empower civil society and strengthen the rule of law”, said Mr Vogt.

The EEA EFTA parliamentary delegation also expressed its concerns regarding the political situation in which the EEA and Norway Grants cooperation was taking place. “For EEA EFTA parliamentarians, the EEA and Norway Grants are underpinned by shared European values: the rule of law, independent institutions, respect of minority and human rights”, said Mr Vogt. “Ultimately, the funds are EEA EFTA taxpayer’s money that needs to be disbursed according to the values endorsed by our citizens”, he added.

The visit also provided the opportunity to meet with several civil society representatives, LGTBIQ activists, officials from the judiciary and representatives of the EU institutions in Warsaw. Given the current humanitarian crisis at the Polish–Belarus border, the delegation also held an exchange of views on this topic with Ms Hanna Machińska, Deputy Ombudsman of the Republic of Poland and with an NGO active in areas adjacent to the border and covered by Poland’s  restrictive  state of emergency.

"Human rights are not negotiable"

"It is important for us to keep track of how these grants are being used. Especially considering the large funds transferred to Poland and the troubling erosion of the rule of law in the country. We have been clear in talks with our Polish and EU colleagues that strong mechanisms and robust institutions are key in securing the fundamental values of the EEA community. This is also necessary  to secure a smooth-functioning Internal Market and involvement from both labour and industry, as well as civil society," said Trine Lise Sundnes, the new chair of the Norwegian delegation.

"This has been a very important visit for us in the Parliamentary Committee. Many testimonies have been disturbing, on how rule of law is neglected. I am particularly concerned about how women are not enjoying the fundamental right to control their own bodies, including their sexual and reproductive rights. It’s important to keep good relations with Poland, but basic human rights are not negotiable," said Bjarkey Olsen Gunnarsdóttir MP from the Icelandic Althingi.

The EEA and Norway Grants are the financial contribution of the three EEA EFTA States: Iceland, Liechtenstein, and Norway. They aim to reduce social and economic disparities in the European Economic Area (EEA) and strengthen bilateral relations with 15 EU countries in Central and Southern Europe. Through the Grants, Iceland, Liechtenstein, and Norway are also contributing to strengthening fundamental European values such as democracy, tolerance, and the rule of law. For the period 2014-2021, the EEA and Norway Grants amount to EUR 2.8 billion.

Find photos from the visit and the meetings here.

Yet another testimony on the (lack of) #RuleOfLaw in #Poland, this time from @Adbodnar former #Ombudsman & @Zabudowska board member of SSP Iustitia. #EFTA parliamentarians will deliver their findings to their respective governments. pic.twitter.com/uwVdnAyyL2