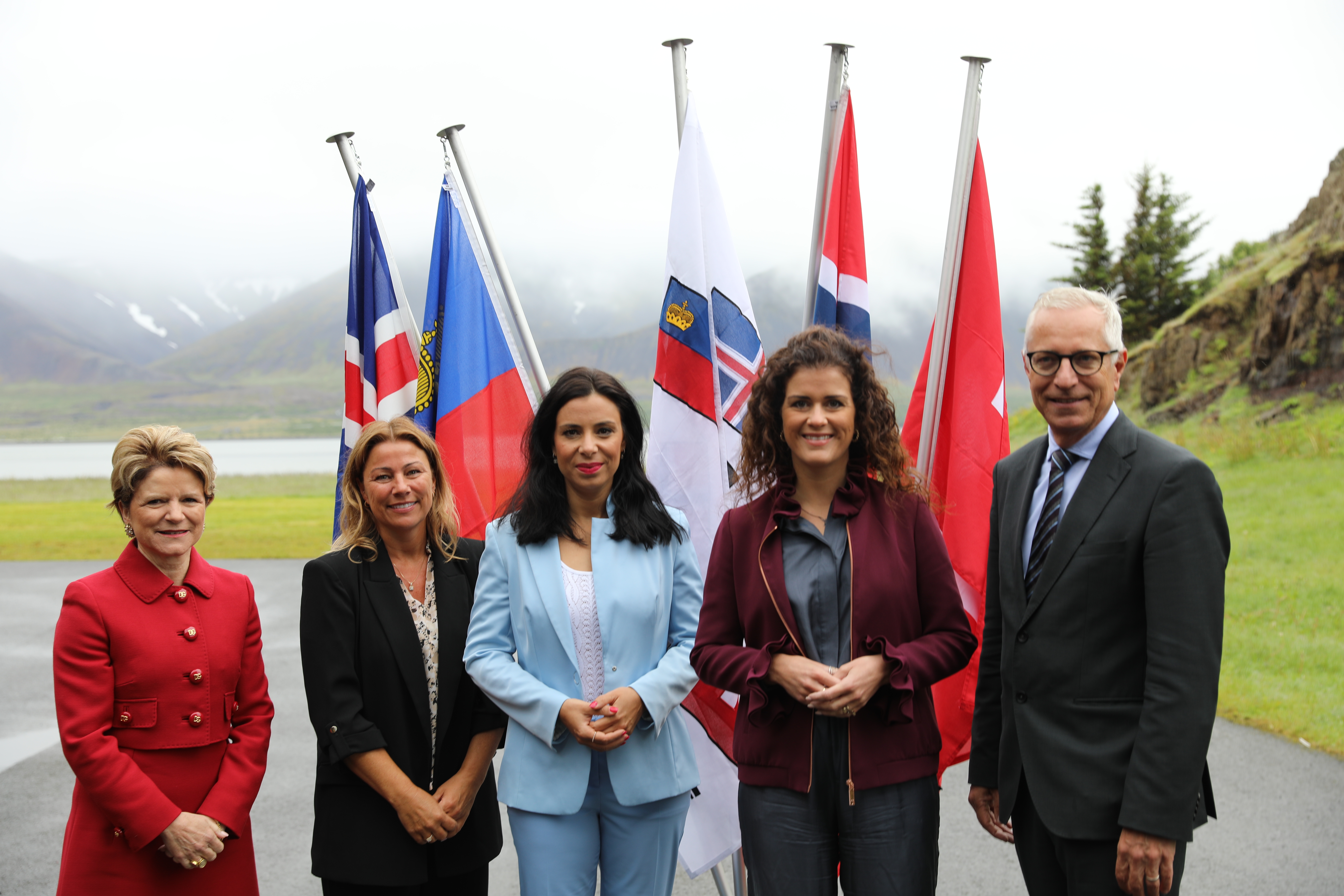 Ministers exchanged views on the state of world trade and expressed concerns about disruptions resulting from Russia’s illegal invasion of Ukraine and the impact of the COVID-19 crisis. Ministers reaffirmed the importance of predicable trade conditions, rules-based trade relations, and open markets as a precondition for reliable cross-border supply chains and access to ensure the continued flow of products and services.

EFTA Ministers reiterated their strong condemnation of Russia’s unprovoked military aggression against Ukraine as stated in their declaration of March 9, 2022. The four EFTA States have taken steps to support Ukraine and its people and imposed numerous economic sanctions against Russia, as a response to the gravity of the violation of international law and of our shared fundamental values of human rights, democracy and the rule of law.

EFTA Ministers recalled UN General Assembly Resolutions A/RES/ES-11/1 of 2 March 2022 and A/RES/ES- 1 7/2 of 24 March 2022 and reaffirmed their support and solidarity with the people of Ukraine. They are gravely concerned about the ongoing suffering of the direct victims in Ukraine, as well as the further effects on the world economy and trade.

Impediments to exports because of the conflict, especially as Ukraine is one of the world's top exporters of key agricultural products and a major supplier to the World Food Program, have significant local, regional, and global effects on food security. In this regard, EFTA Ministers are gravely concerned by reports of the Russian armed forces systematic looting and stealing grain and transporting agricultural machinery to Russia. They strongly condemn these practices.

EFTA Ministers reaffirm the urgency and importance of maintaining open and predictable markets and trade to ensure the continued flow of products and services, especially when it comes to agricultural and food production and supply chains. They also recognise the importance of exercising restraint in excessive stockpiling and hoarding of agricultural products affected by this crisis that are traditionally exported.

Ministers reaffirmed their strong political support for EFTA as a key platform for Member States’ trade policy, even more in times of global uncertainty.

EFTA’s third-country network continued to grow with the entry into force of its free trade agreement with Indonesia in 2021. EFTA States enjoy access to one of the world’s largest networks of preferential trade relations, spanning 40 countries and territories.

During the Ministerial meeting, Ministers of Iceland, Liechtenstein, and the State Secretaries from Norway and Switzerland met with Deputy Prime Minister and Minister of Commerce Jurin Laksanawisit of Thailand, to officially launch the EFTA-Thailand negotiations towards a free trade agreement. They confirmed the first round of negotiations for the end of June in Bangkok.

Minister Jurin Laksanawisit stated that "EFTA is a group of countries with high potential. It has advanced technology and innovation and enjoys longstanding friendly relations with Thailand in all dimensions. In recent years, Thailand has been preparing for these negotiations. We have listened to the views of all stakeholders, including the public sector, businesses, academia, farmers and civil society. We found that everyone strongly supports having a free trade agreement with EFTA.”

Negotiations with Kosovo were also launched today. Rozeta Hajdari, Minister of Industry, Entrepreneurship and Trade of Kosovo met with her EFTA counterparts and stated that "The conclusion of this Agreement is vital for the Republic of Kosovo and aims to develop cooperation between Kosovo and EFTA countries putting focus on deepening and strengthening relations based on common interests in the field of economy, trade and investment.” This launch paves the way for the start of the negotiations this summer in Geneva.

The Moldovan Minister of Economy, Sergiu Gaibu, and the EFTA Ministers and State Secretary jointly announced their commitment towards finalising their negotiations on a free trade agreement in 2022 to further strengthen their trade relations. "An important component in the development of trade between the Republic of Moldova and the EFTA countries is to reduce barriers in trade in services, that will bring benefit to economic operators of both parties. The challenges that we are facing these days allow for more solidarity and more than ever, we need to extend public investment, boost trade and ensure targeted support from people of different communities," said Mr Sergiu Gaibu, Minister of Economy of the Republic of Moldova.

EFTA Ministers and the State Secretaries further discussed their ongoing negotiations with Chile, India, Malaysia, Mexico, and Vietnam and took stock of the status of discussions. They confirmed their willingness to work at high pace to make progress in these processes and further develop their free trade network. Furthermore, Ministers expressed the aim to finalise the agreement with Mercosur, and agreed to follow up on issues related to deforestation and climate change.

Monitoring, assessment, and implementation of existing and future agreements

Ministers stressed the importance of properly applying the existing agreements, including the recently expanded provisions on trade and sustainable development. They welcomed a new mechanism to systematically monitor commitments in EFTA agreements regarding trade and sustainable development. The approach has already been successfully used with some partner countries.

Ministers appreciated the ongoing work on preference utilisation rates to provide an overview and general insights into the effective use of EFTA’s agreements.  EFTA Ministers also decided to carry out an ex-ante sustainability impact assessment (SIA) at EFTA level for the negotiations with Thailand.

They exchanged on the positive outcomes of the implementation of the enhanced transparency policy they decided in October 2021.

Relations with the EU

Ministers were determined to continue the close cooperation with the EU on measures related to Russia´s war of aggression against Ukraine. They underlined the importance of a common response and of preserving the coherence of the Internal Market and stood ready to act swiftly where necessary.

Ministers welcomed the fact that the number of legal acts awaiting incorporation into the EEA Agreement had decreased in 2022. They stressed the importance of legal certainty and homogeneity in the EEA and confirmed the EEA EFTA States commitment to doing their part in ensuring a timely incorporation of EEA-relevant legal acts into the Agreement.

Ministers welcomed the EEA EFTA States´ participation in 12 EU programmes for the period 2021-2027, such as Horizon Europe, Digital Europe and Erasmus+. They underlined their determination to ensure that stakeholders from the EEA EFTA States were fully involved in all relevant activities.

Ministers underlined the need to pursue outreach activities in order to strengthen knowledge of the EEA Agreement. They welcomed that the new EFTA House is actively used for this purpose and that the next EEA Council of 23 November will take place at EFTA premises for the first time in history.

Relations between Switzerland and the EU

Ministers reaffirmed the importance of regular dialogue with the EFTA advisory bodies to help ensure support for EFTA’s trade agenda from domestic stakeholders.  They met with the EFTA Parliamentary Committee and the EFTA Consultative Committee in a joint meeting. The parliamentarians from the four EFTA States, together with the representatives from trade unions and employers’ organisations from the four EFTA States, discussed EFTA’s role in a volatile international trade environment, as well as the state of play of EFTA third-country relations. Both sides welcomed the enhanced dialogue.