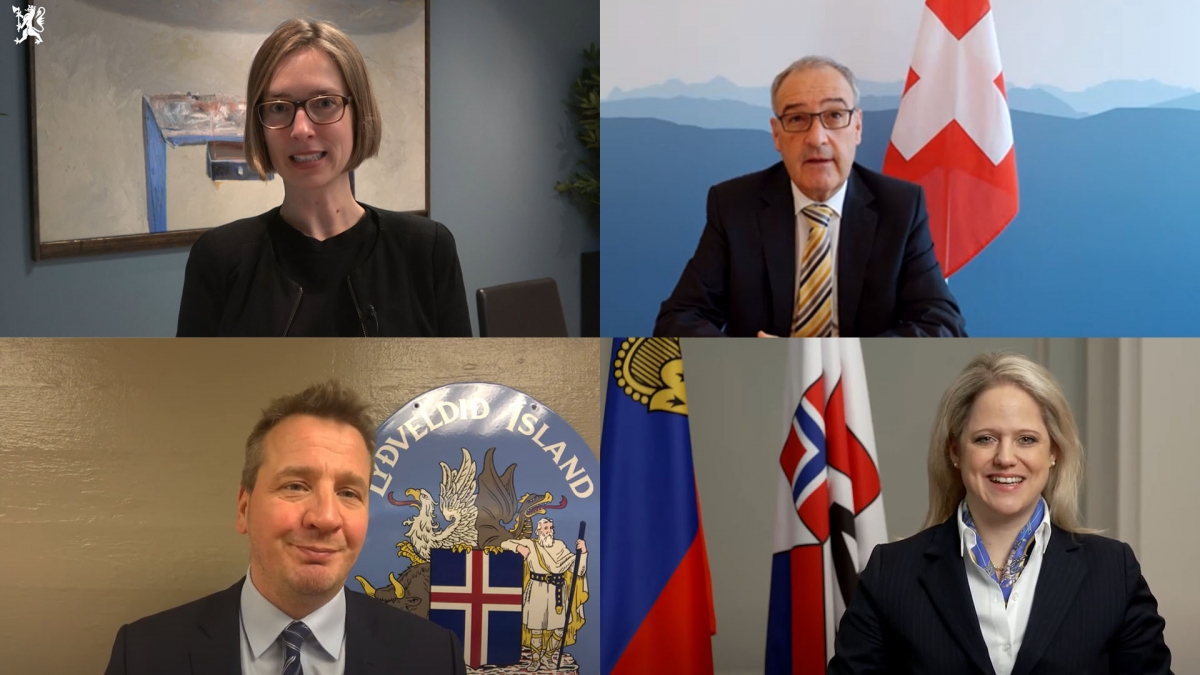 60 years after the establishment of EFTA in 1960, Ministers from Iceland, Liechtenstein, Norway and Switzerland met on 27 October under Swiss Chairmanship through video conferencing for the annual EFTA Ministerial meeting.

Ministers expressed their firm belief that the economic disruption caused by the COVID-19 pandemic reinforces the case for open and rules-based international trade to fuel the economic recovery and ensure stable trading conditions, including supply chain security, with the multilateral system at its core. Ministers reiterated their consistent commitment to the rules-based trading system, both at the WTO and through free trade agreements.

Ministers also reiterated their commitment to the development of international trade relations that contribute to sustainable development. They assessed EFTA’s experience in negotiating and implementing provisions on trade and sustainable development and discussed EFTA’s priorities for the future. In this context, they also welcomed the conclusion of work towards the revision of the model chapter for trade and sustainable development. The revised chapter features additional provisions on climate change, biological diversity, sustainable fisheries, aquaculture, forest management, agriculture, inclusive trade, responsible business conduct, as well as a reinforced mechanism to settle possible disputes. Ministers further welcomed the progress made in developing a new chapter on e-commerce, which reflects EFTA’s willingness and ability to adapt trade agreements to new economic needs and changing technology. Regarding transparency in trade negotiations, Ministers agreed on a series of new initiatives which will enhance the information for the general public and the cooperation with the EFTA Parliamentary Committee and the EFTA Consultative Committee.

EFTA Ministers met on the same day in a joint meeting with the EFTA Parliamentary and the EFTA Consultative Committee. The parliamentarians from the four EFTA States together with the representatives from trade unions and employers’ organisations from the four EFTA States met with EFTA Ministers to discuss EFTA’s trade policy in general, as well as ongoing work on e-commerce, trade and sustainable development and transparency in trade negotiations in particular.

Ministers underlined their intention to continue a close cooperation with the EU on all matters related to the COVID-19 crisis. This included the swift incorporation of relevant and urgent measures into the EEA Agreement in order to maintain coherence of the Internal Market.

Ministers noted with concern the rise in the backlog of legal acts awaiting incorporation into the EEA Agreement. They stressed the importance of legal certainty and homogeneity in the EEA and called for action to be taken to remedy the situation.

Ministers discussed the participation of the EEA EFTA States in future EU programmes which are part of the 2021-2027 EU’s multiannual financial framework. Final decisions on participation will be taken once there is clarity on the corresponding modalities.

Ministers also took stock of the negotiations on the future relationship with the United Kingdom after its withdrawal from the EU and the EEA. In this context, the Ministers informed about their respective regimes applicable as of 1 January 2021 and the status and ongoing work related to comprehensive frameworks for their future trade relations with the UK.

Ministers were informed by Switzerland on the state and prospects of the relations between Switzerland and the European Union (after the popular vote of 27 September on the free movement of persons).  Switzerland aims at consolidating and further developing its bilateral relations with the EU. This requires the search for solutions to the institutional mechanisms of mutual market access

EFTA Ministers also delivered 60th anniversary greetings, to highlight the imporance of the EFTA cooperation for all the EFTA Member States.

"Being a member of EFTA has served Switzerland well over the years, boosting our international trade and prosperity. Keeping borders open for trade and investment is key to enabling the world economy to recover swiftly in these challenging times."

"Since Iceland joined EFTA in 1970, we have enjoyed a period of extraordinary prosperity and growth with regard to the economy, business environment and opportunities for our citizens. Put simply, EFTA was our gateway to becoming a modern economy. It is Iceland’s firm belief that EFTA is much more than the sum of its members. We are simply stronger together."

"EFTA's 60th anniversary is an excellent occasion to celebrate the success story. The EFTA States have negotiated one of the most extensive networks of free trade agreements in the world, and it is still growing. All EFTA States have innovated, high-tech and sophisticated economies. I count on the continuing cooperation within EFTA."

"EFTA membership allowed us to negotiate the EEA, which has guaranteed equal treatment, legal certainty and predictable conditions for citizens and businesses throughout the entire European Internal Market. I believe EFTA will remain a cornerstone of Norway’s trade policy, both on a European and international level."