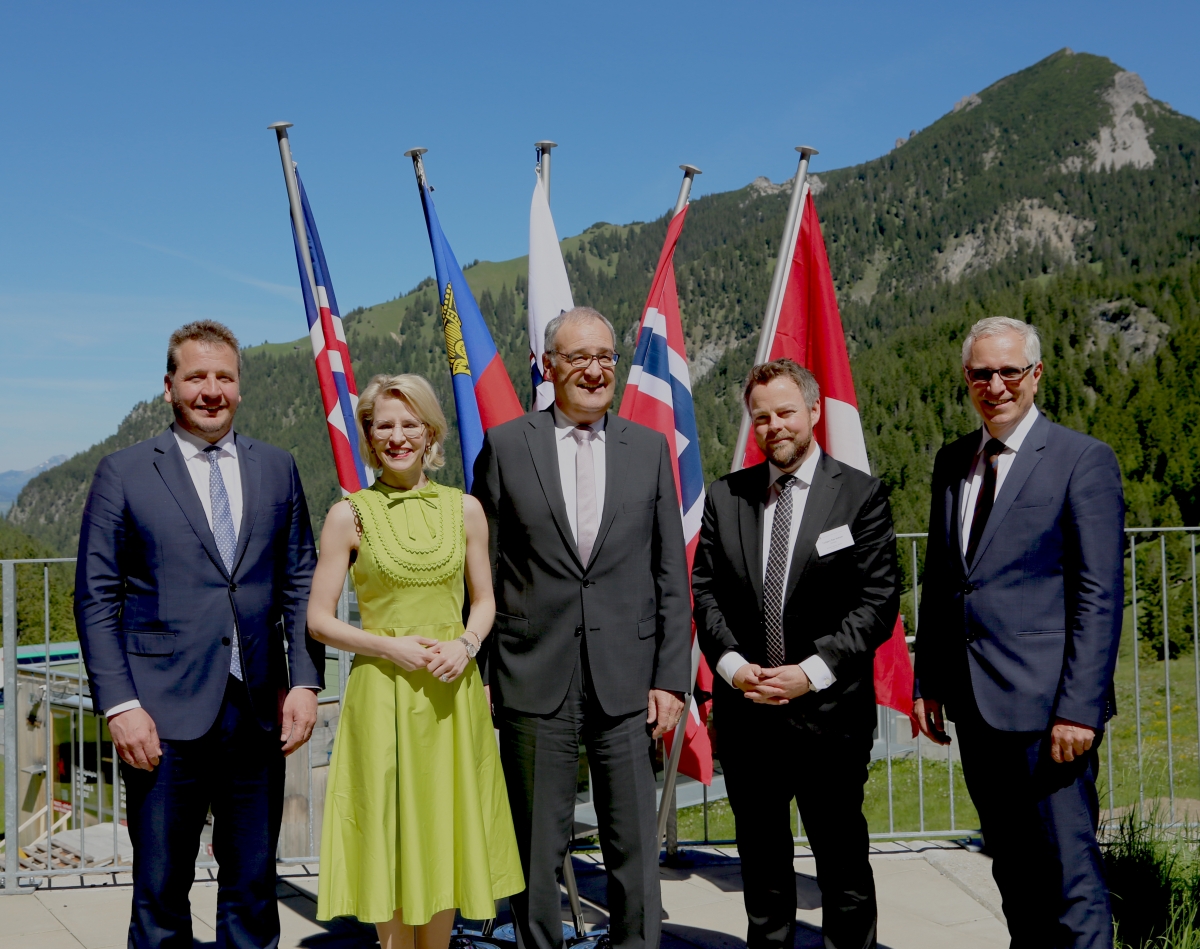 From left: Guðlaugur Þór Þórðarson, Aurelia Frick, Guy Parmelin, Torbjørn Røe Isaksen, Henri Gétaz.
At EFTA‘s Ministerial meeting in Malbun, on 24 June 2019, the Association‘s trade ministers expressed concerns over an increasingly uncertain global trade environment, both due to the uncertain outcome of the Brexit process and escalating trade tensions between the US and China. The ministers also underlined the importance of appointing new judges to the Appellate Body of the WTO to ensure the multilateral trade system continues to function while WTO reform is pursued, and reaffirmed their commitment to open trade on the basis of a transparent and rules-based international order.
Find the Press Communiqué from the Ministerial meeting here.
The summer Ministerial meeting was chaired by Aurelia Frick, Liechtenstein‘s Minister for Foreign Affairs, Justice and Culture. Other ministers included Guðlaugur Þór Þórðarson, Icelandic Minister for Foreign Affairs and External Trade, Torbjørn Røe Isaksen, Norwegian Minister of Trade and Industry, and Guy Parmelin, Swiss Federal Councillor, Head of the Federal Department of Economic Affairs, Education and Research.

During the Ministerial meeting, ministers confirmed their priority to add further to the existing global network of preferential trade agreements outside the EU currently – which currently consists of 29 agreements with 40 partners – by concluding negotiations with Mercosur.  The EFTA Ministers furthermore confirmed their commitment to advancing negotiations with India, Malaysia and Vietnam, in order to make substantial progress in negotiations. Moreover, they discussed the importance to continue the Trade Policy Dialogue with the United States.

Ministers welcomed the revision of EFTA’s model chapter for trade and sustainable development. The chapter now has several new provisions based on recent developments in the field, including references to gender rights, as well as the ability to refer disputes to a panel of experts.

Celebrating the 25th anniversary of the Agreement on the European Economic Area (EEA Agreement), the EEA EFTA ministers re-confirmed their support for and commitment to the EEA Agreement as the continued basis for future relations between the EU and the EEA EFTA States

Ministers took stock of recent developments in the EEA Agreement and discussed what lies ahead in the cooperation between the EU and the EEA EFTA States.

The ministers welcomed the positive contributions made by the EEA EFTA States to the decision-shaping process of EEA-relevant EU legislation and programmes, including by submitting EEA EFTA Comments to EU proposals. They also underlined the importance of early involvement in the EU legislative process and the need to make full use of the decision-shaping opportunities provided for in the EEA Agreement.

Moreover, ministers welcomed the progress made in implementing the EEA Financial Mechanism for the 2014-2021 period, with Memoranda of Understanding with almost all of the Beneficiary States.

Ministers were informed by Switzerland on the state and prospects of the relations between Switzerland and the European Union. Switzerland aims at consolidating and further developing its bilateral relations with the EU. This requires the search for solutions to the institutional mechanisms of mutual market access.

Relations with the UK

EFTA Ministers discussed the implications of the United Kingdom leaving the European Union (EU), and consequently the European Economic Area (EEA), as well as arrangements under the bilateral agreements between Switzerland and the EU.

The UK is a major trading partner of all EFTA States, and the Ministers reiterated their willingness to preserve the current close trade relations between the EFTA States and the United Kingdom and expressed their determination to participate in transitional arrangements until a permanent framework for future trade relations with the UK can be agreed. The EFTA States will continue to consult with each other to help achieve this goal.

Ministers also held a joint meeting with EFTA’s two advisory bodies, the Consultative Committee and the Parliamentary Committee. They discussed recent developments in the EEA and the overall functioning of the EEA Agreement, in particular the 25 years of the EEA and the European Labour Authority (ELA). Furthermore, the meeting was an opportunity to exchange information on third-country relations, and the relationship between Switzerland and the EU.

Ministers and the EFTA Advisory Bodies met with Mr Steven Stone, the Chief of UNEP’s Resource and Markets Branch to exchange views on how trade could further enable the environment.

Find the Press Communiqué from the Ministerial meeting here.

It's a wrap! An eventful & successful #EFTAMinisterial in Malbun, chaired by Minister Aurelia Frick, coming to an end. Find the Press Communiqué & photos here: https://t.co/hItydHosb7 pic.twitter.com/9Yfjym2rm4