The last two decades have seen an impressive expansion of EFTA's free trade network. However, in more recent years, EFTA's activities in updating and further developing existing free trade agreements (FTAs) have become more important. In this article, we will look into the substantial changes in EFTA's free trade negotiations over the years and how EFTA is looking into incorporating these changes into existing FTAs. 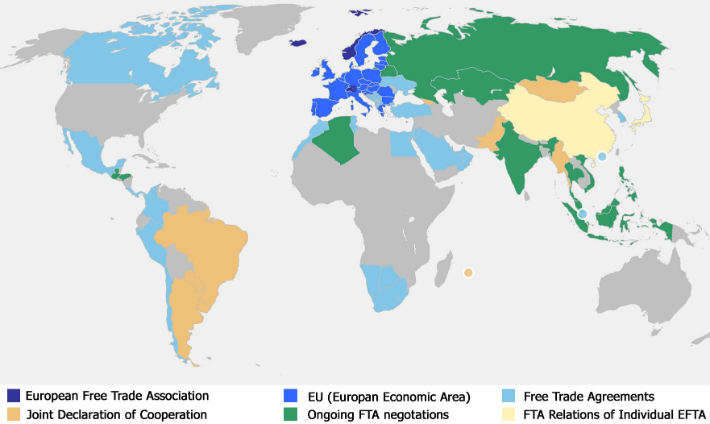 Focusing first on Central and Eastern Europe as well as the Mediterranean region, the scope of EFTA's free trade policies has been widened since the late 1990s to important trading partners worldwide. Agreements with Ukraine, Montenegro, Hong Kong China and Central American States are examples of successful negotiations that have been concluded since 2012. The EFTA States' objective is to maintain and strengthen their competitive position worldwide. To achieve this, they have created one of the world's largest networks of preferential trade relations, which they continue to extend and upgrade.

While EFTA is pursuing a policy of strengthening and expanding preferential trade relations worldwide, it continues to attach the highest priority to a well-functioning multilateral trade system under the auspices of the World Trade Organization (WTO). In EFTA's view, the multilateral and bilateral approaches are mutually supportive.

In more recent years, EFTA's activities in updating and further developing existing FTAs have become more important. Discussions on sectorial expansion and the update of existing FTAs – in areas as diverse as services, investment, industrial and agricultural goods, intellectual property rights (IPR), trade and sustainable development, and customs matters – are being held continuously with a number of FTA partners. With some partners, for example with Turkey and Canada, work on a more comprehensive review, update and expansion of the respective existing FTAs is also taking place.

FTAs – moving towards a broader scope

Substantial changes have been made to free trade negotiations and agreements since the 1990s when EFTA negotiated some of the oldest FTAs still in place. Older agreements would most often focus on trade in goods and IPR, and hence not always cover all important areas relevant to trade. Since then, and with the advent of further globalisation, the EFTA States have aimed to include all relevant areas in new agreements and also in existing ones, in order to increase and simplify trade and increase market access liberalisation.

While EFTA's FTAs have undeniably been a success, some agreements are limited in scope where further developments hold the potential to spur trade and cooperation beyond that achieved by past agreements. More recently concluded agreements have added substantive rules and commitments on services, investment and/or public procurement, which respond more broadly to opportunities and challenges faced by businesses operating in today's globalised economic environment.

Most recently, since 2010, EFTA has begun to systematically introduce model provisions on trade and sustainable development in its negotiating processes. While these provisions are already found in more recent FTAs, they might also become a feature in existing agreements as a result of their review and further development.

The FTA between the EFTA States and Turkey is in many respects a historic one for EFTA. Entering into force in 1992, it is the oldest of its kind still in effect today and covers trade in goods as well as IPR. In addition, bilateral agricultural agreements between the individual EFTA countries and Turkey have been concluded, which form part of the instruments creating the free trade area. The Joint Committee that supervises its implementation has met 11 times under the agreement.

For more than 20 years the EFTA-Turkey FTA has liberalised trade, enhanced the legal framework for economic cooperation and opened the path for increasing bilateral commercial flows between Turkey and the EFTA States. The numbers speak for themselves: merchandise trade has increased steadily since the FTA entered into force and reached USD 5.4 billion in 2014. This special relationship was strengthened during January 2015 when representatives of the EFTA Parliamentary Committee visited Turkey in support of a modernised FTA. The EFTA Parliamentary Committee, as well as its Turkish counterparts, agreed that the existing FTA had been a success that should be built on.

The process of modernising and extending the current agreement is already underway, and the second round of negotiations took place from 25 to 27 February 2015. Topics being discussed include trade in services, sanitary and phytosanitary (SPS) issues, technical barriers to trade (TBT), trade facilitation, IPR, competition, sustainable development, and horizontal and institutional provisions. EFTA and Turkey have held constructive discussions over the course of the two rounds and have been able to achieve progress pertaining to the update and expansion of their FTA in several areas. The delegations have agreed to hold a further round of negotiations, which is scheduled to take place in early summer 2015.

The modernisation of EFTA's FTA with Canada

While Canada is regarded as an important trading partner of the EFTA States, the FTA between the parties is relatively recent. It entered into force on 1 July 2009 – Canada's national day and 142nd anniversary.

The EFTA-Canada FTA focuses on trade in goods, while basic agricultural products are covered by agreements concluded bilaterally between Canada and the EFTA States. The agreement has the potential to yield significant benefits for exporters in all five participating countries while also serving economic operators in the EFTA States and Canada by providing new links between European and North-American supply and value chains. While the agreement has been successful in reducing tariffs and simplifying trade between the parties, it lacks coverage of many important trade areas commonly found in a modern 21st century FTA.

At the fourth Joint Committee meeting under the FTA held in October last year, there were constructive discussions on the functioning of the agreement and prospects for its further development. Both delegations confirmed their common understanding, also against the background of the recently concluded comprehensive FTA between Canada and the European Union, that there is potential to expand the scope of the current FTA to areas such as trade in services, investment, government procurement, IPR and sustainable development, which would benefit economic operators and consumers on both sides.

Areas already covered by the existing FTA (trade in goods including market access, rules of origin, trade remedies, TBT, SPS measures and trade facilitation, as well as horizontal and institutional provisions) might also be reviewed and updated. An exploratory process regarding a comprehensive review and expansion of the existing FTA might start in the current year.