Waste production and waste treatment in the EEA 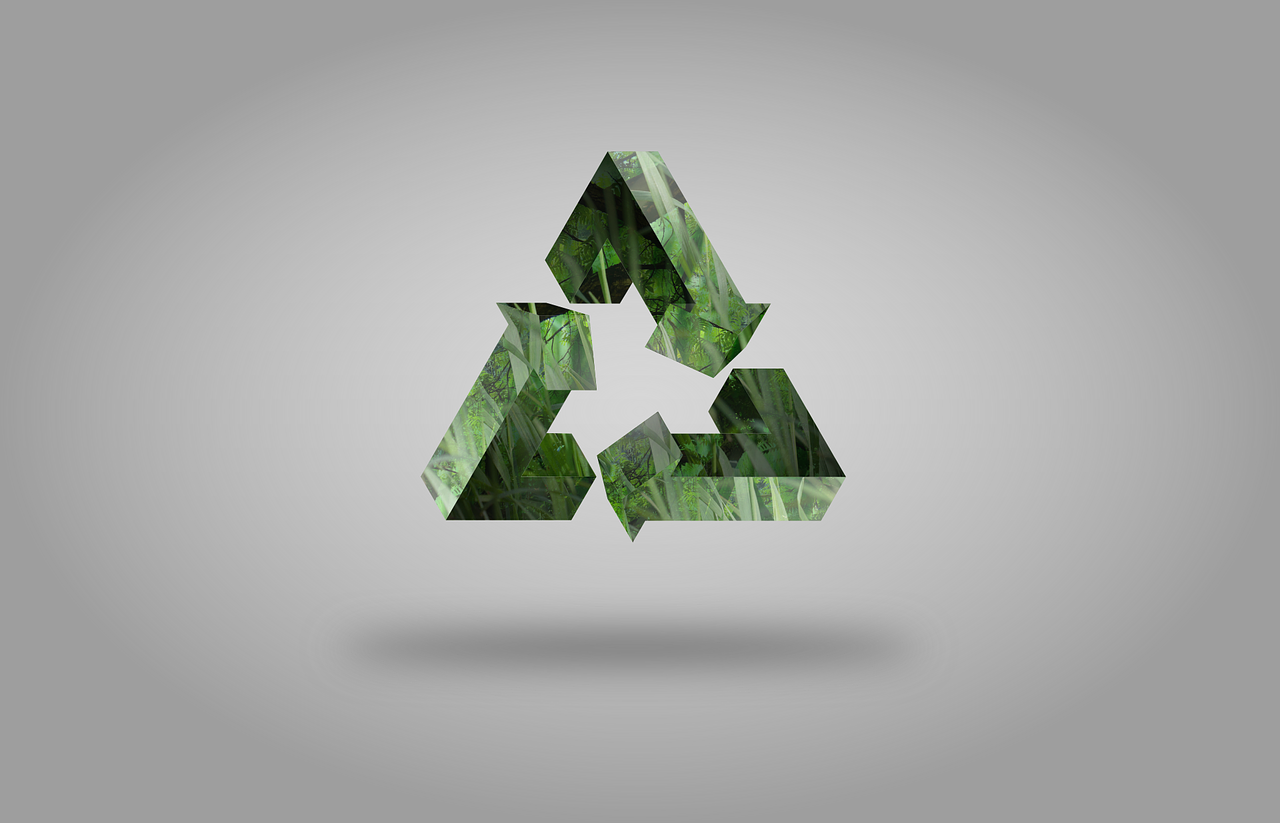 Since the early days of the industrial era, resources extracted in order to produce goods for consumption and investment have typically ended up, after a certain time, as disposal waste. In the past, waste treatment consisted mainly of disposing waste in landfills or incineration. Hence, production and consumption resembled a linear process in which neither the sustainability of the input “resources”, nor the treatment of “waste” as the result of consumption received much attention (“take-make-consume-throw away” pattern).

Due to the increasing environmental impact of this production/consumption/disposal mode in recent years, this pattern has been repeatedly criticised. Awareness of the scarcity and limited regeneration of natural resources, as well as the environmental impact and related costs of rapidly growing amounts of waste and its handling have led to calls for political measures aimed at waste reduction. Nowadays more efforts aim at avoiding waste on the one hand, while separating and reusing certain waste materials as input resources into the production process on the other hand. In this sense, economies shift away from linear production processes towards becoming circular economies, reducing the amount of waste wherever possible and reusing resources entailed in “waste”.

Figures on waste generation and treatment of waste (disposal and recycling) reflect two aspects that concern the actual transition process towards a circular economy.[1] Waste statistics play an important role in understanding and monitoring respective changes in the production/consumption processes towards more sustainable solutions, as political decisionmakers urge for a transformation in economic production processes.[2]

This article addresses the topic of waste production and disposal within the European Economic Area (EEA), with a focus on EEA EFTA Member States (Iceland, Liechtenstein and Norway) in the area of waste generation. It uses data freely available through Eurostat’s reference database.[3] Due to the commonly agreed data production cycle, data is updated every two years with a delay of 18 months. Hence, the latest data in Eurostat’s database refer to 2016 and new data will only be available from mid-2020 onwards.

The following table 1 gives a detailed overview on generation of waste by EEA countries in total tonnes per country for the years 2004 – 2016, as a share for each country of the EEA total waste in tonnes (2016) and per capita (2016).

Although total waste generation in the EEA has dropped slightly by about 1 percent from 2006 (2 577 183 117 tonnes) to 2016 (2 550 471 564 tonnes), the general tendency over this period shows that the amount of waste generated has remained almost unchanged from year to year. For the three EFTA EEA countries, the data shows a decline of total waste generation from 2008 – 2010, followed by a massive increase until 2016 for Iceland whereas the increase for Liechtenstein and Norway is somewhat more moderate but also clearly above the 2008 levels. 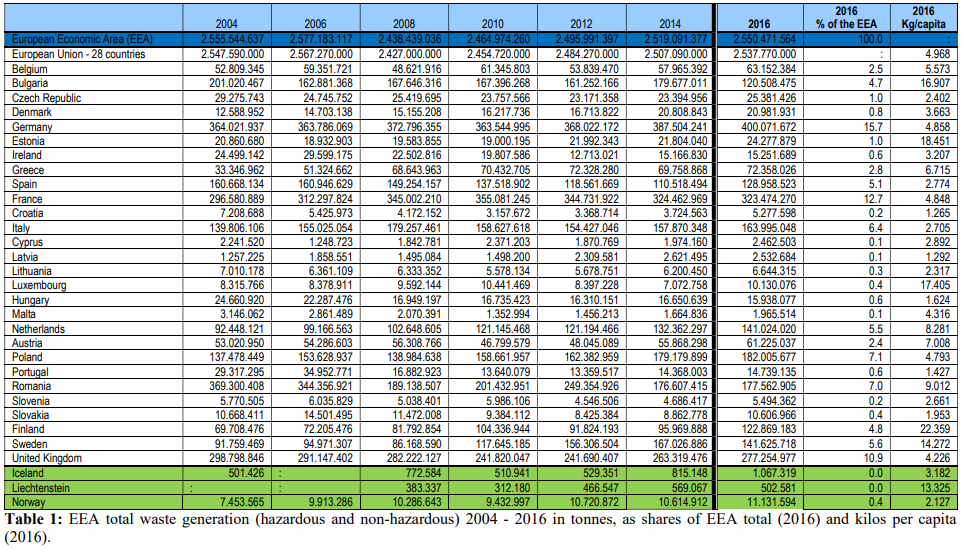 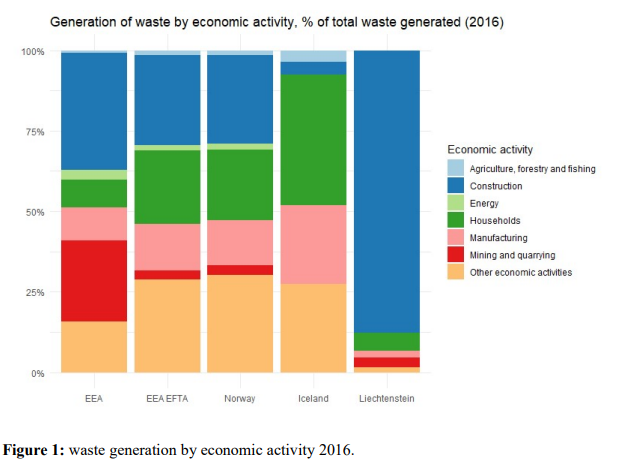 As can be seen in figure 1 with regard to waste generation by economic activity in general, within all EEA economies in 2016 the industrial sector (“Construction” and “Manufacturing”) generates the highest amounts of waste, mainly due to “Construction”, followed by the waste generation of the activity “Mining and Quarrying”. The service sector, which is included in the categories “Energy” and partially in “Other economic activities”, as well as “Households” obviously contributes to lesser extents to the total waste generation.

The picture is somewhat different when focusing on the EFTA EEA countries. Here, the “Other Economic Activities”, including parts of the service sector, generate the most waste. This result is mainly driven by Norway and Iceland. “Construction” accounts for the highest values of waste generation in Liechtenstein.

Treatment and recovery of waste in the EEA

Waste treatment as a key component of waste management refers to all actions that aim at reducing the environmental impact of waste. It entails disposal (mainly landfill and incineration) as well as recovery (recycling, backfilling and energy recovery) activities.

Figures on the total hazardous and non-hazardous waste treatment as compared to waste generation give a first impression on the level and development of the amount of total waste treated or not treated at all: 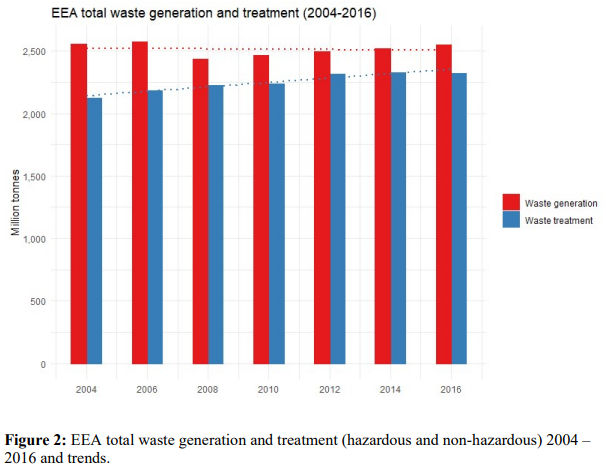 In order to obtain a clearer picture of the transformation towards circular economies it is obviously not sufficient to look at results for total waste treatment. Instead, we have to breakdown the category of “waste treatment” by looking at figures for “recovery” (recycling and backfilling) and confronting them with the total waste generation, as shown in figure 3: 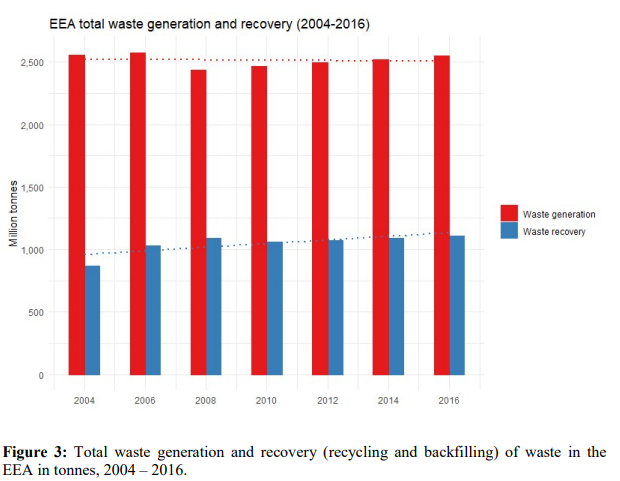 In comparing recovery of waste (including recycling and backfilling) in figure 3 with the total generation of waste for the years 2004 – 2016 it becomes evident, that not even half of the total waste is subject to recovery actions, although the trend (blue dotted line) is steadily increasing. The shares of recovered waste amounted only to around 34 percent in 2004 and increased since then by approximately ten percentage points to 43 percent of total waste generation in 2016. It should be kept in mind, however, that probably not all kinds of waste generated are potentially subject to recycling or backfilling. 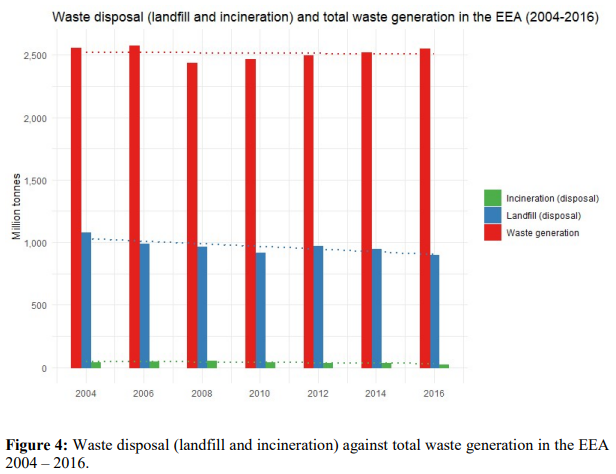 Disposal of waste has been going down from 2004 to 2016 for both landfill and incineration. Whereas landfill disposal has been reduced from 42.2 percent in 2004 to 35.5 percent in 2016, incineration of disposal went down from 1.5 percent to 0.9 over the same period. The decline in landfill disposal is reflected in the clear downward trend (blue dotted line) and is in addition to the weaker downward tendency for disposal incineration and the increasing shares of waste recovery an indication that the situation is slowly changing towards a more sustainable treatment of waste.