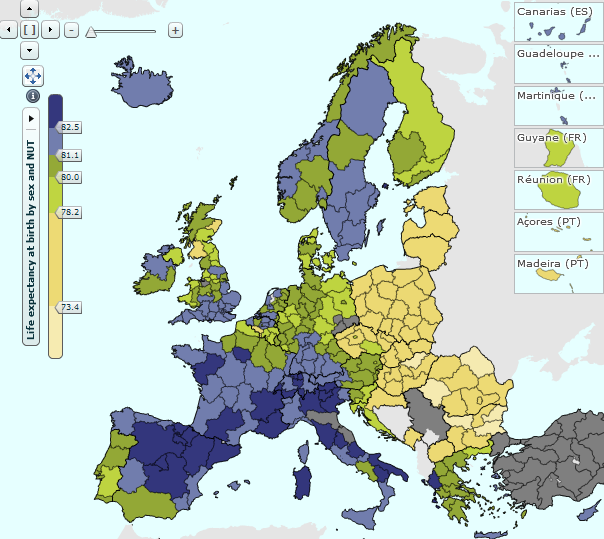 European statistics are frequently presented at national level, but the Eurostat website also provides data at regional level. Although regional breakdowns are often also available from the national statistical institutions, the Eurostat website features an application that enables you to make comparisons between regions in different European countries, and visualise the results through interactive graphics.

Did you know that while 48.8% of the population in the Norwegian region of Oslo and Akershus has attained tertiary education, only 29% of the population in the neighbouring Hedmark and Oppland region has done the same? This means that the educational attainment level in Hedmark and Oppland is far closer to that of Northern Ireland or the Swiss region of Ticino than to that of its neighbour.

Regional breakdowns of the Swiss fertility rate show that Ticino has the lowest rate, at 1.4 children per woman. Central Switzerland has the highest fertility rate at 1.6, which is still lower than in Iceland, Liechtenstein and Norway. However, compared with other European regions, the Swiss fertility rate is not particularly low. The lowest regional fertility rate is found in the Spanish Canary Islands, which have a rate of 1.0 child per woman. The Principality of Asturias and Galicia in Spain both have a rate of 1.1, the same as the Polish region of Opolskie, the Hungarian regions of Közép-Magyarország and Nyugat Dunántúl, the Romanian regions of West and South West Oltenia and the Italian region of Sardinia.

It is also possible to use the Eurostat website to identify regions with similar characteristics. For example, the Norwegian Trøndelag region has a similar relationship between regional gross domestic product (purchasing power standard per inhabitant) and human resources in science and technology as the Romanian region of Bucharest-Ilfov, the Spanish region of Comunidad Foral de Navarra, and West Sweden.

These and many other regional figures can be found on Eurostat’s Regional Statistics Illustrated. The application can be used to present regional statistics as interactive maps and charts, and contains 50 indicators with time series.