The total number of asylum applicants in the four EFTA countries reached almost 39’000 in 2012. This represents an increase of roughly 17% compared to one year before. In 34% of all cases a positive decision was granted in first instance.

According to a recent Eurostat publication, the highest increase in relative terms among EFTA countries was registered in Iceland. The number of applicants rose by 40% compared to the previous year reaching 105 applications in total. Switzerland also saw a substantial increase of almost 20%. With more than 28’000 asylum seekers Switzerland received the major share of applications among EFTA countries. Norway registered slightly less than 10’000 applications over the same period, which means an increase of roughly 8% compared to 2011. In Liechtenstein the number of applications remained constant with 75 applicants.

In the EFTA countries, roughly one out of every four applications for asylum was entered by a person below the age of 18 and 70% were male applicants. The largest group of applicants consisted of Eritreans with 5’595 applications in total. Nationals of Nigeria and Somalia represented the second and third largest groups with 3’115 and 2’985 applications respectively. However, the distribution among EFTA countries was relatively mixed. Whereas almost a quarter of all applications in Norway were entered by nationals of Somalia, Eritreans are the largest group in Switzerland and the second largest in Norway. In contrast, a major share of applicants in Liechtenstein originated from Eastern European countries.

For more information visit the Eurostat database or consult the article
Asylum applicants and first instance decisions on asylum applications: 2012. 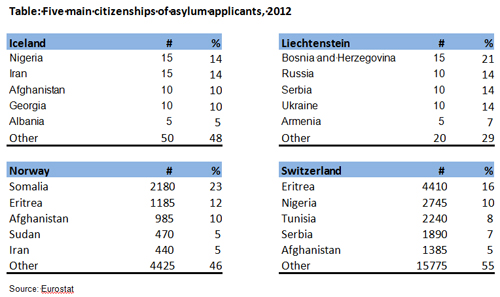