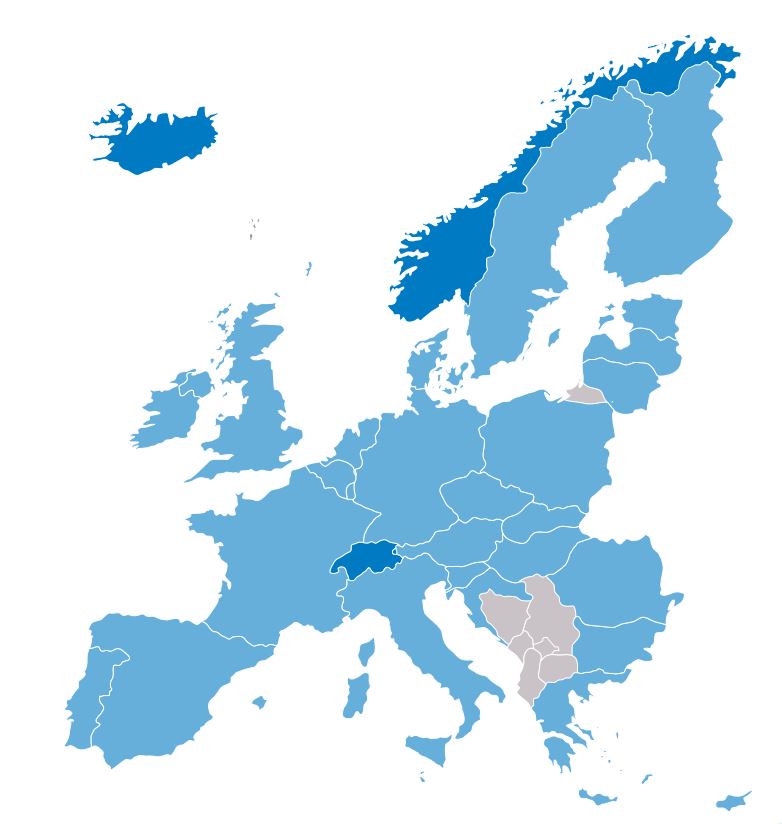 In Liechtenstein, citizens of the other EFTA States and of the EU make up 28% of the population and the figure in Switzerland is 17%. These are among the highest rates in Europe. The corresponding rates for Iceland and Norway are much lower, at 9 and 7%, but still higher than for many EU Member States.

EU/EFTA immigration to Iceland has increased fivefold since 2011, while in Norway, it has fallen by about one half. Switzerland and Liechtenstein show more stable levels of immigration from the EU and EFTA States, with a moderate decrease in the influx since the top year in 2013. Whereas the majority of EU/EFTA immigrants to Switzerland and Liechtenstein arrive from the neighbouring countries, Poland and Lithuania account for a high proportion of EU/EFTA immigration to Iceland and Norway. Annual emigration from Iceland has gradually decreased since 2011, reflecting improved economic conditions.

You can view the charts in higher quality here.

Click here for a print-friendly version of the article.

2019 marks the 25th anniversary of the EEA Agreement, which integrates Iceland, Liechtenstein and Norway into the European Single Market. The Single Market greatly facilitates the movement of EEA nationals across European borders, eliminating the need for residence and work permits[1]. The bilateral Agreement on the Free Movement of Persons between Switzerland and the EU creates similar rights for Swiss citizens in the EU and EU citizens in Switzerland. The EFTA Convention extends these rights to citizens of the EFTA States in the EEA.

Based on Eurostat data, this article looks at the level and structure of the EU/EFTA population and of EU/EFTA immigration in each of the EFTA States by citizenship. The number of “EU/EFTA citizens” of a given EFTA State does not include citizens of that particular EFTA State. For example, EU/EFTA citizens in Iceland include citizens of the 28 EU Member States, Liechtenstein, Norway and Switzerland – but not Icelandic citizens living in Iceland.

The article also takes a look at emigration from each EFTA State to other EU and EFTA States, but based on country of residence and country of destination rather than on citizenship. The figures in this section include all residents, independent of citizenship.

The number of EU/EFTA citizens in the four EFTA States has been growing over the past eight years (2011-2018), both in absolute numbers and as a percentage of the total population, as illustrated in Chart 1. The increase has been especially marked in Iceland and Norway, less so in Switzerland and Liechtenstein.

Norway is also home to a considerable population of Polish and Lithuanian citizens, representing 29 and 12% of the EU/EFTA population. Their share has been increasing steadily since 2011. Swedish citizens are the second biggest EU/EFTA immigrant community in Norway, although their share of the total has gone down in recent years, from 18% in 2011 to 12% in 2018. Substantial numbers of German, Danish and British citizens are also settled in Norway.

Italian, German and French citizens constitute the majority of the EU/EFTA population of Switzerland, although their share of the total has declined slightly since 2011. Italians and Germans account for about 22% each, with citizens of France making up 9%. The third largest EU/EFTA immigrant community is the Portuguese, with 19% of the total.

The majority of Liechtenstein’s EU/EFTA population are citizens of the neighbouring countries of Switzerland (35%) or Austria (21%). Other important groups are German, Italian and Portuguese citizens.

Immigration up in Iceland, down in Norway

Chart 2 shows the immigration of EU/EFTA citizens into the EFTA Member States during 2011-2017 by citizenship.

Immigration of EU/EFTA citizens to Iceland stood at 8455 persons in 2017, more than five times higher than in 2011. The increase in immigration was particularly marked in the years 2015-2017, with the country’s economy improving. Citizens of Poland have consistently made up 40-50% of the EU/EFTA immigrants during 2011-2017, making Poland the biggest source of EU/EFTA immigration by far. Poland, Lithuania and Latvia alone made up 65% of the new immigrants in 2017.

In Norway, the number of new arrivals from the EU and EFTA Member States stood at 20 313 in 2017, down by one half since the top year 2011. Polish citizens were the biggest group, followed by Lithuanians and Swedes. However, the share of these three nationalities in annual EU/EFTA immigration to Norway has fallen gradually from 60% in 2011 to 47% in 2017. In spite of the sharp decline in overall EU/EFTA immigration, a few nationalities actually increased their numbers in absolute terms: There were more Italian, Greek, Croatian and Finnish immigrants to Norway in 2017 than in 2011. From an EFTA perspective, the sharp decline in immigration from Iceland (1 309 persons in 2011 down to 263 in 2017) is worth noting.

Switzerland shows a different pattern compared to Iceland and Norway. While the number of EU/EFTA immigrants per year is much higher, at 82 887 in 2017, the changes over time are less pronounced. However, the annual number of new EU/EFTA immigrants has decreased steadily since 2013. Another notable difference between Switzerland and the Nordic EFTA States is that the majority of EU/EFTA immigrants come from the neighbouring countries of Germany, Italy and France, rather than from countries further away. While German citizens accounted for 30% of the total in 2011, this was down to 22 in 2017. On the other hand, immigration from Italy (11% in 2011, 17% in 2017) and France (12% in 2011, 15% in 2017) was up. Immigration from Portugal nearly halved during that seven-year period.

EU/EFTA immigration to Liechtenstein, at 353 persons in 2017, is dominated by Swiss, German and Austrian citizens. The annual number of newcomers fluctuates from year to year without any clear pattern, but is usually between 300 and 400. The total number of EU/EFTA immigrants in 2017 was 353, down from 433 in the peak year 2013.

Emigration: Where are EFTA residents moving to?

Chart 3 illustrates emigration from the EFTA States by destination country. The underlying figures refer to emigration of EFTA residents regardless of their citizenship. They thus include EU/EFTA and other foreign citizens returning to their home countries or to third countries after residing in an EFTA State, as well as citizens of the reporting country.

The figures in this section should be interpreted with some caution, because statistical authorities don’t always have data on emigrants’ destination country. This applies in particular to Switzerland, where emigrants with unknown destination went down from 19% of the total in 2011 to a still rather high 11% in 2017. This inevitably causes some distortion to both the absolute numbers and the structure of emigration. This section only considers emigration where the destination country is known.

In 2017, more than 3100 residents left Iceland for other EFTA or EU Member States. Annual emigration decreased between 2011 and 2017, reflecting improved economic conditions in Iceland. Emigration to Norway, which was quite substantial in the immediate aftermath of the economic downturn ten years ago, has decreased remarkably in later years. Important emigration destinations for Icelandic residents in 2017 were Denmark, Sweden and Poland.

Due to a break in the time series related to a change in methodology, Norwegian data are only included for the years 2014-2017. EU/EFTA emigration from Norway increased from 2014 to 2016, reaching more than 25000 persons at its peak and remaining at a high level in 2017. While Sweden and Denmark have consistently remained among the top destinations, there has been a major increase over time in the number of Norwegian residents moving to Poland and Lithuania. As with Iceland, these are probably mostly returning citizens of those countries.

Switzerland saw a stable growth in emigration to other EFTA or EU Member States throughout the years 2011-2017, with around 75000 residents leaving the country in 2017, up by more than 50% since 2011. The major destination countries were Germany, France, Italy, Spain and Portugal.

Emigration from Liechtenstein has remained relatively stable, at 336 to 381 persons per year. Neighbouring Switzerland is clearly the most important destination country and together with Austria and Germany made up for 85% of emigration to other EFTA or EU Member States in 2017.

You can view the charts in higher quality here.