Launching of negotiations between the EFTA States and India 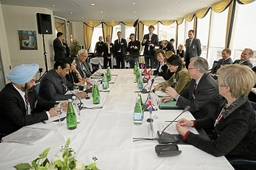 Davos – 26 January 2008 – Ministers from the Member States of the European Free Trade Association (EFTA) - Iceland, Liechtenstein, Norway and Switzerland – and India agreed to launch negotiations on a broad-based Trade and Investment Agreement.

Ministers from India and the European Free Trade Area (EFTA) Iceland, Liechtenstein, Norway and Switzerland agreed to launch negotiations on a comprehensive Trade and Investment Agreement following consideration of the recommendations of a Joint EFTA-India Study Group established on 1 December 2006. The Joint Study Group completed its work in December 2007 and concluded that both sides would benefit from a broad-based Trade and Investment Agreement. This Agreement is foreseen to include inter alia trade in goods, agriculture, trade in services, investment, government procurement, competition, intellectual property rights and technical cooperation. The EFTA States and India aim at an early start of these negotiations.

The total value of the EFTA-India merchandise trade amounted to approximately 2.7 billion USD in 2006, around 30% increase compared to 2005 in nominal value terms.