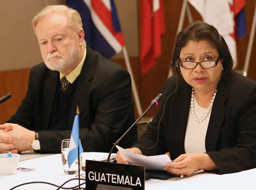 On 17 November 2014, Ministers from the Member States of the European Free Trade Association (EFTA) – Iceland, Liechtenstein, Norway and Switzerland – and from Guatemala marked the outcome of the negotiations on Guatemala’s accession to the EFTA-Central America Free Trade Agreement (FTA).

The event, which took place at the occasion of the EFTA Ministerial Meeting in Geneva, was attended by Johann N. Schneider-Ammann, Head of the Federal Department of Economic Affairs, Education and Research of Switzerland, Gunnar Bragi Sveinsson, Minister for Foreign Affairs and External Trade of Iceland; Aurelia Frick, Minister of Foreign Affairs of Liechtenstein; and Monica Mæland, Minister of Trade and Industry of Norway; as well as by María Luisa Flores, Vice-Minister of Economy of Guatemala.

Economic relations between the EFTA States and the 3 Central American States are already close and important. In 2013, total merchandise trade between the two sides amounted to nearly 1 billion US dollars. Trade with Guatemala amounts to about one fifth of that figure and has been growing at an impressive 15% annual rate over the last five years.

The EFTA-Central America FTA was signed by the EFTA States, Costa Rica and Panama in 2013 and entered into force in 2014. It has a comprehensive coverage, including trade in goods (industrial and agricultural goods, fish and other marine products), rules of origin, trade facilitation, trade in services, investment, competition, protection of intellectual property rights, government procurement and sustainable development.