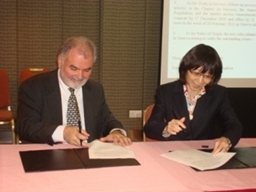 Ambassador Christian Etter and Ms Leonia Tai.
Delegations from the EFTA States and Hong Kong, China met for a fourth round of negotiations on a comprehensive Free Trade Agreement on 30 November to 3 December 2010 in Hong Kong.

During the round, the negotiating teams of both sides succeeded in finalising several parts of the draft Agreement, including trade in goods, intellectual property rights, investment and government procurement. In most other fields, only a small number of issues remained for further discussion or final clearance.

More work will primarily be required in the area of trade in services. The Parties agreed to pursue their efforts in this respect and to meet again in March 2011, with a view to concluding their negotiations.

The EFTA delegation was headed by Ambassador Christian Etter, from the Swiss State Secretariat of Economic Affairs, while Miss Leonia Tai, Deputy Director-General of Trade and Industry, led the Hong Kong side.