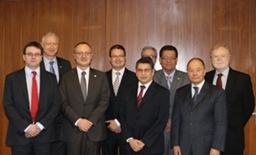 Delegations from the EFTA States and Costa Rica, Guatemala, Honduras and Panama convened for a first round of negotiations on a broad-based free trade agreement from 28 February to 1 March 2012 in Geneva.

The launch of negotiations between EFTA and Central American States had been announced by Ministers from both sides on 14 November 2011. In December, a common framework for the negotiating process was agreed by the Parties.

The first round allowed for an initial review of all envisaged topics in an open and constructive spirit, with Ambassador Didier Chambovey from the Swiss State Secretariat for Economic Affairs acting as EFTA’s spokesperson.

Delegations agreed on the structure of the draft agreement as well as on a range of follow-up work in preparation for the second round of negotiations, foreseen to be held in Panama.

During the last decade, merchandise trade between EFTA and the four Central American countries has increased substantially to reach almost USD 1 billion in 2011.