EFTA meets Russia, Belarus and Kazakhstan for ninth round of free trade negotiations 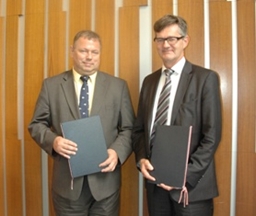 RuBeKa Spokesperson Mr Maxim Medvedkov and EFTA Spokesperson Mr Jan Farberg.
Delegations from the seven Parties pursued their work towards a broad-based preferential trade agreement from 1 to 4 July 2013 in Geneva.

Since the last round of negotiations conducted in April 2013, expert groups on trade in goods, trade in services and investment, rules of origin and government procurement had convened in intersessional meetings to advance further in their respective fields. At the ninth round in Geneva, these discussions were pursued, also extending to most other areas of the draft agreement. Detailed follow-ups were agreed to be undertaken by both sides in view of the next round, foreseen for September.

Mr Jan Farberg, Director General at the Norwegian Ministry of Trade and Industry, headed the EFTA side, while Mr Maxim Medvedkov, Director of the Department for Trade Negotiations in the Ministry of Economic Development

of the Russian Federation, acted as spokesperson for the members of the Customs Union.

The three countries forming the Customs Union of Russia, Belarus and Kazakhstan are EFTA’s sixth largest export destination and fourth largest import source outside the European Union, with two-way merchandise trade worth USD 8.7 billion in 2012. It is also a significant partner for trade in services and investment.