EFTA holds tenth round of free trade negotiations with Russia, Belarus and Kazakhstan 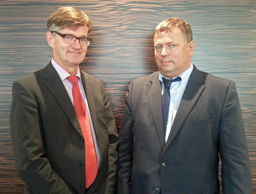 EFTA Spokesperson Mr Jan Farberg and RuBeKa Spokesperson Mr Maxim Medvedkov.
Convening in Reykjavik, Iceland from 23 to 26 September 2013, delegations from the EFTA States and the customs union of Russia, Belarus and Kazakhstan made further progress towards a broad-based free trade agreement (FTA).

The programme for the round included discussions on most topics foreseen to be covered by the FTA, notably trade in goods, services and investment, intellectual property rights, government procurement and sustainable development. Work by the different expert groups will be pursued on the basis of agreed follow-ups ahead of the next round of negotiations, scheduled to take place in early 2014.

The EFTA team was headed by Mr Jan Farberg, Director-General at the Norwegian Ministry of Trade and Industry, while Mr Maxim Medvedkov, Director of the Department for Trade Negotiations in Russia’s Ministry of Economic Development, acted as spokesperson for the states of the customs union.

The three countries forming the Russia/Belarus/Kazakhstan customs union are EFTA’s sixth largest export destination and fourth largest import source outside the European Union, and a significant partner for trade in services and investment.