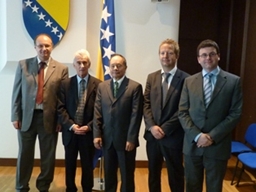 The second round of negotiations on a free trade agreement between the EFTA States and Bosnia and Herzegovina took place from 23 to 25 May 2011 in Sarajevo.

Building on work undertaken since the first round in March, delegations pursued their discussions with a focus on trade disciplines, customs and origin matters, and market access for industrial and agricultural goods. Significant progress was achieved and a follow-up programme was set out which will include further meetings in June and September 2011.

The EFTA team was led by Ambassador Hanspeter Tschäni from Switzerland, while Assistant Minister Midhat Salic of the Ministry of Foreign Trade and Economic Relations headed the Bosnia and Herzegovina delegation (shown second and first from the left in the picture, together with chief negotiators from the other EFTA States).