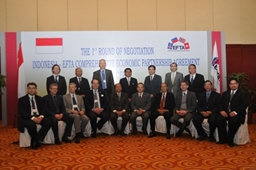 Delegations from the EFTA States and Indonesia held the first round of negotiations on a Comprehensive Economic Partnership Agreement (CEPA) from 31 January to 2 February 2011 in Jakarta.

In July 2010, building on the results of a joint feasibility study, the Presidents of Indonesia and of Switzerland (on behalf of EFTA) mandated their representatives to prepare for and open negotiations on a CEPA between the two sides.

During the first round conducted in Jakarta from 31 January to 2 February 2011, the parties established the framework and modalities for the negotiations. Groups of experts conducted initial discussions, in particular on trade in goods, customs and origin matters, trade in services, and investment. A range of further topics, among them intellectual property rights and cooperation, were addressed at the level of heads of delegations.

The negotiating team was led by Ambassador Heinz Walker-Nederkoorn, Switzerland, on the EFTA side, while Ambassador Soemadi Brotodiningrat headed the Indonesian delegation. The parties agreed to meet again in June 2011.

In 2009, two-way merchandise trade between the EFTA States and Indonesia amounted to USD 692 million. EFTA’s exports reached USD 408 million, with machinery and pharmaceuticals as the main categories. Indonesia primarily exported ships and boats, as well as footwear and apparel, to the EFTA States. Investors from the EFTA States have a significant presence in Indonesia.