EFTA and Turkey hold fifth round of negotiations 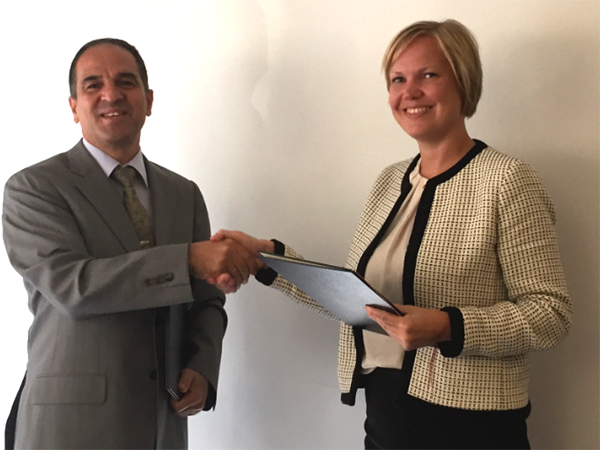 Mr Murat Yapici, Director-General for EU Affairs, Turkey, and Ms Cecilie Børnes Utgård, EFTA Spokesperson and Senior Adviser in the Norwegian Ministry of Trade, Industry and Fisheries.
From 22 to 25 August 2017, delegations from the EFTA States and Turkey met in Geneva for the fifth round of negotiations on the modernisation and expansion of their Free Trade Agreement (FTA).
Ms Cecilie Børnes Utgård, Senior Adviser in the Norwegian Ministry of Trade, Industry and Fisheries, acted as EFTA Spokesperson, while Mr Murat Yapici, Director-General for EU Affairs, led the Turkish delegation.
The parties continued their discussions and made significant progress in respect of the update and expansion of the FTA. Negotiations were held in several areas, most notably in trade in goods, including trade remedies; rules of origin and trade facilitation; trade in services; intellectual property rights; and legal and horizontal matters, including dispute settlement. The parties agreed to hold the sixth round before the end of 2017. Intersessional discussions on various outstanding issues will also be held in the meantime.
Bilateral EFTA-Turkey merchandise trade has increased steadily since 2001, reaching EUR 6 billion in 2016. EFTA’s main exports to Turkey are precious metals, pharmaceutical products, machinery and mineral fuel. Merchandise imports from Turkey consist mainly of precious metals, apparel articles and accessories, and vehicles.
Share this
Email Facebook Twitter Google Plus LinkedIn