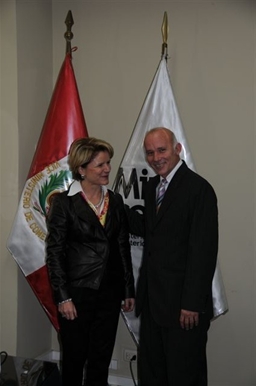 Negotiations between both sides were launched in 2007 and concluded during the fifth round, which was held on 27-31 October 2008 in Lima. The EFTA side was led by Ambassador Marie-Gabrielle Ineichen, from Switzerland, while Vice-Minister Eduardo Ferreyros headed the Peruvian delegation.

Upon entry into force, the FTA will improve market access for industrial goods, agricultural products and fish, notably by removing customs duties on most products originating in one of the Parties. The agreement will also provide for rights of establishment for investors, access to government procurement markets, protection of intellectual property rights, rules on competition, a dispute settlement mechanism, and a framework for cooperation.

Until the fourth round, EFTA had conducted the negotiations jointly with Peru and Colombia. For the final phase, the processes were split, and a conclusion with Colombia was reached in June 2008. Together with Peru, EFTA will now proceed to a legal review of the agreed texts, in preparation of the signing of the FTA by Ministers in the course of 2009.

Bilateral trade between the EFTA States and Peru has grown significantly over the last years, reaching 325 million USD in 2007, with a trade balance in favour of Peru. EFTA's leading exports to Peru in 2007 consisted of machinery, pharmaceuticals, clocks and watches, as well as optical and medical instruments. The main products imported from Peru into the EFTA countries were fish meal, and fats and oils. The Peruvian market is also of growing interest to service providers and investors from EFTA States.