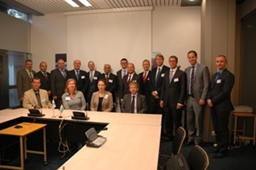 The Joint Committee under the Free Trade Agreement between the EFTA States and the Palestinian Authority convened for the fourth time on 23 October 2012 in Geneva.

Delegations reviewed all areas covered by the free trade agreement, with a focus on the potential for further strengthening trade relations between the two sides, including through technical cooperation. The agreement has been operational since 1999.

The EFTA delegation was headed by Ambassador Remigi Winzap from Switzerland while Mr Ziad Toame, Director General in the Ministry of National Economy,  led the Palestinian side.

Bilateral merchandise trade amounted to USD 34 million in 2011, representing an increase of 22% compared to the preceding year. EFTA’s main exports to the Palestinian Authority are pharmaceutical products, tobacco and machinery. The primary Palestinian exports to the EFTA States consist of vegetables, fats and oils, and fruit and nuts.