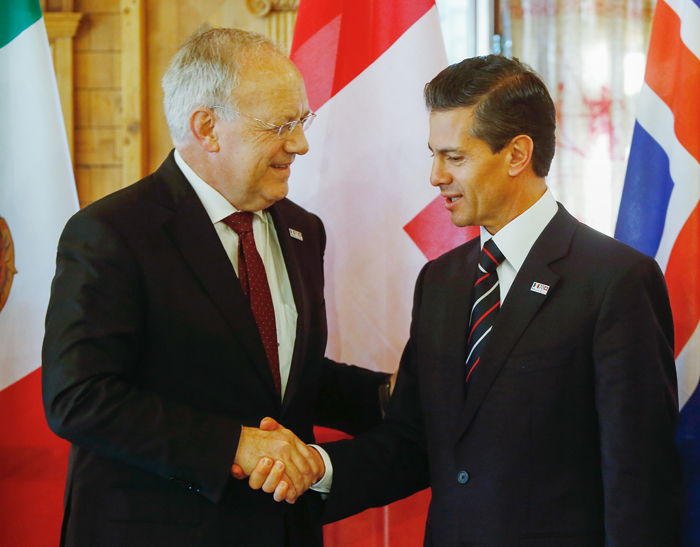 President of the Swiss Confederation, Johann N. Schneider-Ammann, (EFTA Chair), and President of Mexico, Enrique Peña Nieto (Photo: Eddy Risch, Liechtenstein)
Davos, 22 January 2016: Ministers and other representatives from the Member States of the European Free Trade Association (EFTA) - Iceland, Liechtenstein, Norway and Switzerland - and Mexico, launched negotiations on a review of the EFTA-Mexico Free Trade Agreement (FTA) with a view to further deepening economic ties and expanding trade and investment between the two sides.

The EFTA-Mexico Free Trade Agreement was signed in Mexico City on 27 November 2000 and entered into force on 1 July 2001. Mexico and EFTA agreed to launch negotiations following the finalization of the General Framework for a Review of the Free Trade Agreement between the United Mexican States and the EFTA States on 28 October 2015, whereby the Parties agreed on the terms of reference for negotiations for updating and expanding the Agreement.

In the review process, the Parties foresee to enhance market access for goods, services, investment and government procurement. The Parties also aim to reflect international developments and the treaty practice of the Parties since the signing of the EFTA-Mexico FTA, notably in regard of rules of origin, SPS, TBT, trade remedies, IPR and competition, as well as in areas not yet covered by the Mexico-EFTA FTA, such as trade facilitation and sustainable development.

High-resolution prictures from the launch event