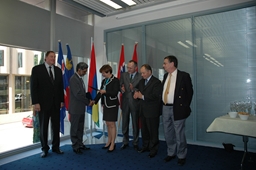 The four EFTA States (Iceland, Liechtenstein, Norway and Switzerland) and the Republic of Mauritius signed a Joint Declaration on Co-operation on 9 June 2009 in Geneva.

Through the Declaration, both sides commit themselves to enhancing their bilateral economic relations, to facilitate trade and investment co-operation and to examine the possibility of further developing their trade relationship. A Joint Committee will meet periodically to discuss these issues.

Mauritius has been a member of the GATT/WTO since 1970. At a regional level, Mauritius is one of 19 Member States of COMESA (Common Market for Eastern and Southern Africa).

Economic relations between the EFTA States and Mauritius

The value of total EFTA-Mauritius merchandise trade (imports plus exports) amounted to 76 million USD in 2008. The EFTA States exported goods to Mauritius worth 43 million USD, while imports reached USD 34 million. Imports from Mauritius consisted mainly of clocks and watches, precious stones and knit apparel. EFTA’s key exports were precious stones, machinery, clocks and watches as well as mineral fuels and pharmaceutical products. Taking a longer-term perspective, bilateral trade has grown at an average annual rate of 7.1% since 2000.

EFTA has established one of the most extensive networks of preferential trade relations worldwide. In addition to the European Union as the EFTA States’ most important economic partner, EFTA’s network of Free Trade Agreements currently extends to 21 countries and territories. With eight partners, free trade negotiations are currently under way. Joint Declarations on Cooperation have been concluded by EFTA with further seven States.