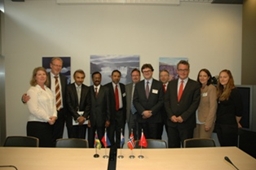 The Committee established under the EFTA-Mauritius Joint Declaration on Cooperation (JDC) held its inaugural meeting on 10 June 2013 in Geneva.

The JDC between the EFTA States and Mauritius was signed in June 2010. On the occasion of the first meeting of the Joint Committee under that instrument, delegations reviewed developments in bilateral trade and investment flows, exchanged information on activities in the field of preferential trade and discussed potential areas for closer cooperation.

In the Joint Committee, the EFTA delegation was headed by Mr Sveinung Røren, Deputy Director General in the Ministry of Trade and Industry of Norway, while Ambassador Israhyananda Dhalladoo, Permanent Representative of Mauritius in Geneva, led the Mauritian side.