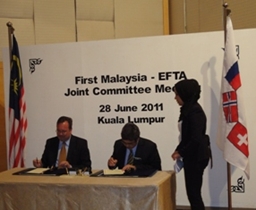 The Joint Committee established under the EFTA-Malaysia Declaration on Cooperation convened for the first time on 28 June 2011 in Kuala Lumpur.

A Joint Declaration on Cooperation between the four EFTA States and Malaysia had been signed in July 2010. On the occasion of the first meeting of the Joint Committee under the Declaration, the Parties exchanged information on their trade policies and treaty networks. They concurred to establish a cooperation programme and to work further on the possibility of negotations on a free trade agreement between the two sides.

The EFTA delegation was headed by Mr Martin Zbinden, Minister and Head of the Free Trade Agreements/EFTA Division in the Swiss State Secretariat for Economic Affairs, while Mr Zulkafli Abd. Karim, Deputy Secretary General of the Ministry of International Trade and Industry, led the Malaysian side.