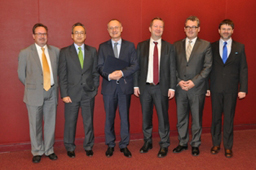 A third round of negotiations on a broad-based free trade agreement between the EFTA States and Malaysia took place in Geneva from 25 to 28 November 2014.

Constructive discussions were held in all the above areas, and intersessional work was agreed in preparation for the fourth round of negotiations, foreseen for the second quarter of 2015 in Malaysia.

Merchandise trade between the EFTA States and Malaysia amounted to USD 1.86 billion in 2012, with exports from EFTA of USD 996 million and imports of USD 867 million. EFTA and Malaysia held the first round of negotiations in April 2014 in Geneva after agreeing on a scoping paper setting out the framework for the negotiations. A second round took place in Kuala Lumpur in September.