Ministers from the Member States of the European Free Trade Association (EFTA) – Iceland, Liechtenstein, Norway and Switzerland – and from Georgia signed a Joint Declaration on Cooperation on 28 June 2012 in Gstaad, Switzerland. Through the Declaration, both sides commit to further enhancing their bilateral economic relations. A Joint Committee will meet periodically to discuss relevant issues.

The EFTA-Georgia Joint Declaration on Cooperation was signed by Johann N. Schneider-Ammann, Head of the Federal Department of Economic Affairs of Switzerland; Össur Skarphéðinsson, Minister for Foreign Affairs and External Trade of Iceland; Aurelia Frick, Minister of Foreign Affairs of Liechtenstein; and Trond Giske, Minister of Trade and Industry of Norway, on the EFTA side and by Vera Kobalia, Minister of Economy and Sustainable Development of Georgia.

Economic relations between the EFTA States and Georgia

The value of total EFTA-Georgia merchandise trade (imports plus exports) amounted to USD 77 million in 2011. The EFTA States exported goods to Georgia worth USD 42 million, while imports reached USD 35 million. Imports from Georgia consisted mainly of mineral fuels/oil and aluminium and articles thereof. Top exports from the EFTA States included pharmaceutical products, clocks and watches, and fish and marine products. Trade has grown significantly in recent years, recording an average annual growth of 46% since 2007.

EFTA has established one of the most extensive networks of preferential trade relations worldwide. In addition to the European Union as the EFTA States’ most important economic partner, EFTA’s network of free trade agreements currently extends to 33 countries. With several further partners, free trade negotiations are currently under way. Joint declarations on cooperation have been concluded with another seven States.

Click here for other language versions of the press communiqué (German, French, Icelandic and Norwegian). 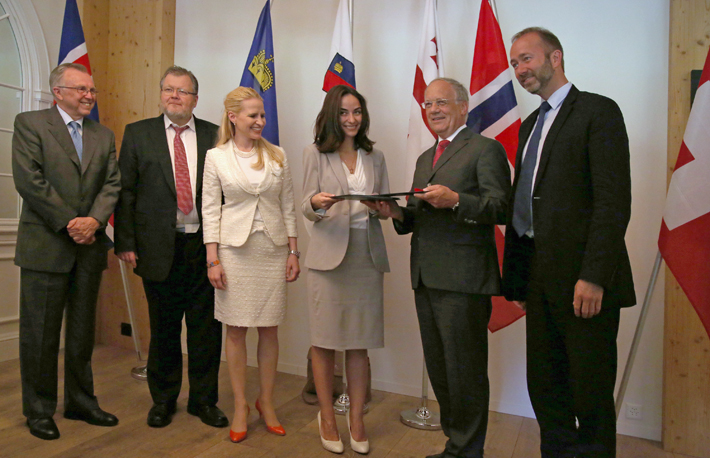