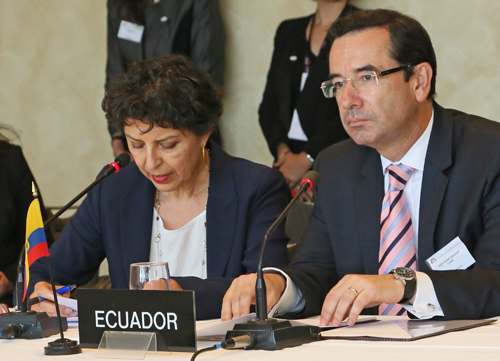 Mr Juan Carlos Cassinelli Cali, Minister of Foreign Trade of Ecuador, and his interpreter.
Ministers from the Member States of the European Free Trade Association (EFTA) – Iceland, Liechtenstein, Norway and Switzerland – and from Ecuador launched free trade negotiations on 27 June 2016 in Bern. A Joint Declaration on Cooperation was signed by the two sides in June 2015

A Joint Statement launching the negotiations was signed by Lilja Alfreðsdóttir, Minister for Foreign Affairs and External Trade of Iceland (EFTA Vice Chair); Aurelia Frick, Minister of Foreign Affairs of Liechtenstein; Monica Mæland, Minister of Trade and Industry of Norway; and Didier Chambovey, Ambassador and Delegate of the Federal Council for Trade Agreements, Head of the World Trade Division, State Secretariat for Economic Affairs of Switzerland; as well as by Juan Carlos Cassinelli Cali, Minister of Foreign Trade of Ecuador.

Economic relations between the EFTA States and Ecuador

Merchandise trade between the EFTA States and Ecuador has increased at an average annual rate of 10 % between 2005 and 2015. In 2015, total merchandise trade between EFTA and Ecuador amounted to USD 288 million. The EFTA States exported goods to Ecuador worth USD 125 million, while imports stood at USD 163 million. EFTA’s imports from Ecuador consisted mainly of fruits, cocoa, and precious metals. Exports from the EFTA States include pharmaceuticals, organic chemicals, as well as machinery and mechanical appliances.

With a combined population of around 13 million, and a combined GDP of USD 1.2 trillion, the EFTA States are the world’s 9th largest merchandise trader and the 5th largest trader in commercial services, as well as significant actors in the area of foreign direct investment. They now have 27 FTAs with a total of 38 partners outside the European Union.

High-resolution pictures from the launch event 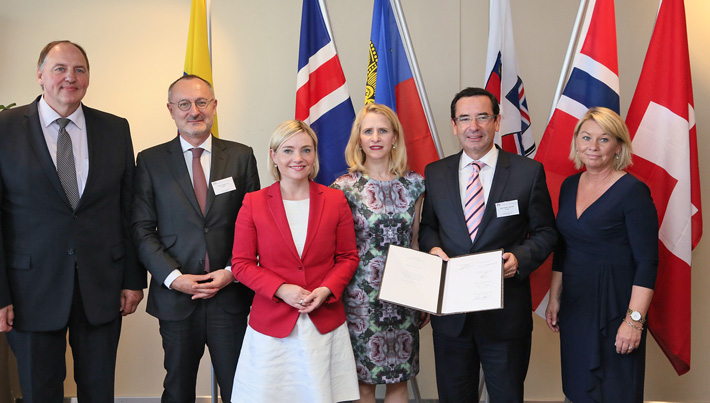