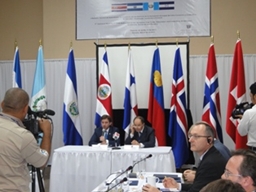 Delegations from the EFTA States, Panama, Costa Rica, El Salvador, Guatemala and Honduras met on 23 March 2011 for an exploratory meeting in Panama City.

The Panamanian delegation was headed by Mr Francisco Alvarez de Soto, Vice-Minister for International Trade Negotiations, who acted as spokesperson for the Central American countries, while Ambassador Norbert Frick from Liechtenstein acted as the EFTA spokesperson.

The parties explored the possibility of establishing closer trade relations between the two regions. In this context, they exchanged views on macroeconomic issues, their respective trade relations and policies as well as approaches to trade agreements. They concurred to discuss further steps in the near future.