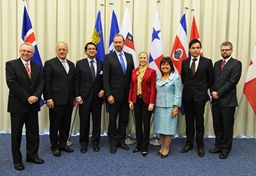 Ministers from the Member States of the European Free Trade Association (EFTA) - Iceland, Liechtenstein, Norway and Switzerland - and Panama, together with Costa Rica and Honduras, today announced the start of negotiations on a comprehensive Free Trade Agreement (FTA) with a view to further enhancing the economic ties and promoting trade and investment between the two sides.

The EFTA States, Costa Rica, Honduras and Panama declared their readiness to commence negotiations early next year, whilst other Central American countries may join the negotiations at a later stage.

The announcement was made by Trond Giske, Minister of Trade and Industry of Norway (EFTA Chair); Einar Gunnarsson, Permanent Secretary of State of the Ministry for Foreign Affairs and External Trade of Iceland; Aurelia Frick, Minister of Foreign Affairs of Liechtenstein; and Johann Schneider-Ammann, Head of the Federal Department of Economic Affairs of Switzerland, on the EFTA side; as well as by Diana Salazar, Viceminister for International Trade Negotiations of Panama; Ambassador Ronald Saborío Soto of Costa Rica; and Ambassador Dacio Castillo of Honduras.
Building on a Joint Declaration on Cooperation signed by the EFTA States and Panama in July 2010, the EFTA States and the Central American States have since explored the possibility of establishing closer trade relations between the two regions. As part of this process, a high-level exploratory meeting was held in March 2011 in Panama City.

Click here for other language versions of the press release (French, Icelandic, German and Norwegian)

Click on the image below to see more pictures from the announcement.