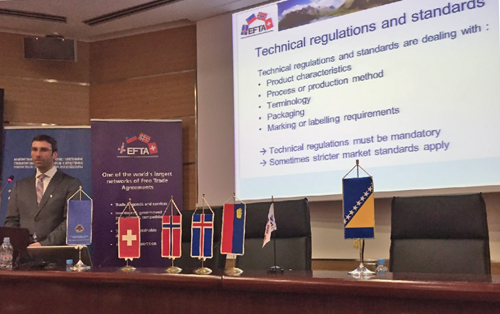 Marking the entry into force of the Free Trade Agreement (FTA) between the EFTA States (Iceland, Liechtenstein, Norway and Switzerland) and Bosnia and Herzegovina, a trade promotion seminar organised by both parties is being held on 17 February in Sarajevo and on 19 February in Banja Luka for the benefit of businesses from Bosnia and Herzegovina.
With a focus on the opportunities created by the new FTA for Bosnian and Herzegovinian producers and exporters, experts will present the technical and practical aspects of accessing the EFTA markets. Topics covered will include customs issues such as rules of origin, proofs of origin and the verification procedure, as well as the issues of sanitary and phytosanitary requirements and technical standards.

During the roundtable discussion on “Trade Promotion and Export Opportunities” participants from different companies will have the possibility to exchange views on how to make best use of the business opportunities arising from the new FTA.