EFTA and Algeria hold 4th round of free trade negotations 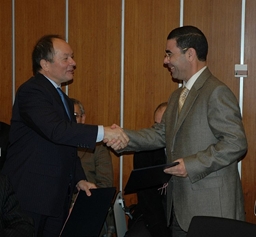 Delegations of the EFTA States (Iceland, Norway, Liechtenstein and Switzerland) and of Algeria met in Geneva on 18 - 21 November 2008 to continue negotiations with a view to concluding a Free Trade Agreement.

EFTA aims at complementing its network of Free Trade Agreements with partner countries in the Mediterranean region.  The EFTA-Algeria negotiations were started in November 2007,  and considerable further progress was achieved during the 4th round.

Apart from trade in industrial goods, in agricultural products and fish, areas such as rules of origin, intellectual property rights, technical cooperation and dispute settlement were discussed. Negotiations between the two sides are expected to be concluded in early 2009.

The EFTA delegation was led by Ambassador Norbert Frick from Liechtenstein, while Mr Ammar Boularak, Secretary-General of the Ministry of Commerce, headed the Algerian delegation.