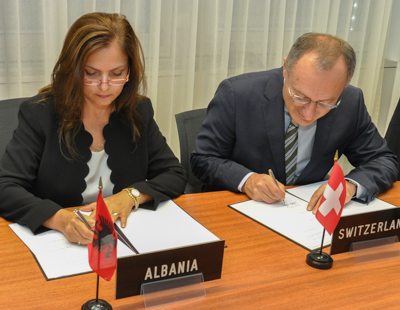 Ambassador Filloreta Kodra, Albania, and Ambassador Didier Chambovey, Switzerland.
Representatives of the four EFTA States and Albania met on 18 September in Geneva to sign a protocol adding a chapter on trade and sustainable development to the EFTA-Albania Free Trade Agreement (FTA).

The issue of coherence between the economic, social and environmental aspects of a country’s development on the one side, and trade policy on the other, is of ever growing importance. With the new chapter to the FTA, both parties undertake to provide for and encourage high levels of environmental and labour protection.

Ambassador Filloreta Kodra signed the protocol on behalf of Albania. EFTA was represented by Ambassador Martin Eyjolfsson from Iceland, Ambassador Peter Matt from Liechtenstein, Ambassador Harald Neple from Norway and Ambassador Didier Chambovey from Switzerland, who signed on behalf of their respective countries.

The EFTA-Albania FTA entered into force on 1 November 2010 in Albania, Liechtenstein and Switzerland; on 1 August 2011 in Norway; and on 1 October 2011 in Iceland. Merchandise trade between the EFTA States and Albania has doubled over the last ten years, peaking at USD 56 million in 2013. Since the entry into force of the FTA in 2010, Albania’s exports to EFTA have more than tripled and now account for almost USD 20 million. EFTA’s main merchandise imports from Albania consist of woven apparel (40%), footwear (20%) and electrical machinery (15%). On the export side, pharmaceutical products account for the majority of EFTA’s exports to Albania (60%), followed by printed materials (10%) and tobacco products (6%). 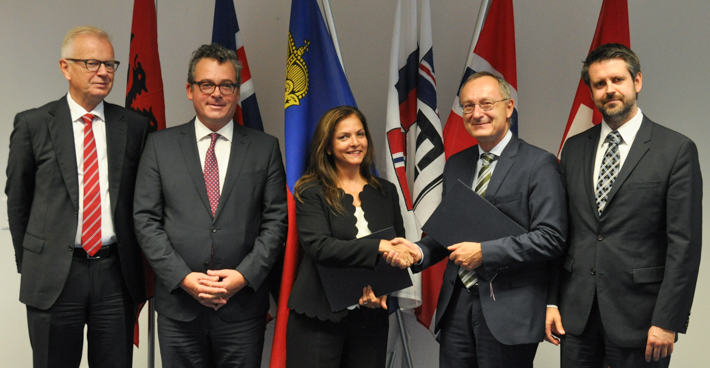