The EFTA States and Serbia sign a Free Trade Agreement 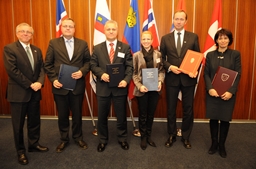 Ministers from the Member States of the European Free Trade Association (EFTA) and Serbia signed a Free Trade Agreement today.

The Agreement will further enhance the economic ties between the EFTA States and Serbia.

The basis for closer trade relations between EFTA and Serbia was laid by a Joint Declaration on Co-operation, signed in 2000. Negotiations were launched in April 2009 and concluded in Belgrade in July 2009. For EFTA, the Free Trade Agreement was signed by Ms Aurelia Frick, Minister of Foreign Affairs of Liechtenstein and current EFTA Chair; Mr Gylfi Magnússon, Minister for Economic Affairs of Iceland; Mr Trond Giske, Minister of Trade and Industry of Norway; and Ms Doris Leuthard, Federal Councillor and Head of the Federal Department of Economic Affairs of Switzerland. Mr Mladjan Dinkic, Minister of Economy and Regional Development of the Republic of Serbia, signed for Serbia.

The Free Trade Agreement focuses on the liberalisation of trade in goods. EFTA will abolish all customs duties on Serbian industrial products, including fish and other marine products, as of the entry into force of the Agreement. Serbia will dismantle its customs duties for imports of industrial products from the EFTA States by the end of 2013. Bilateral arrangements on agricultural products between the individual EFTA States and Serbia also form part of the instruments establishing the free-trade area between both sides. Provisions on the protection of intellectual property rights, on services and investment, and on public procurement complement the Agreement. A Joint Committee will supervise the functioning of the Agreement, which will enter into force after parliamentary approval in the respective Parties.

In 2008, total merchandise trade between EFTA and Serbia amounted to USD 338 million. Exports from the EFTA States reached USD 267 million, consisting mainly of pharmaceutical products, machinery, optical/medical equipment, clocks and watches, and chemicals. The EFTA States imported products from Serbia worth USD 71 million, primarily aluminium and articles thereof, machinery, and edible fruits and nuts. Companies from the EFTA States are furthermore significant investors in the Serbian services and manufacturing sectors.

With a combined population of around 12 million, the EFTA States are the world’s ninth largest merchandise trader, as well as significant actors in the areas of trade in services and foreign direct investment. They now have concluded 20 Free Trade Agreements with a total of 29 partner countries outside the EU. Of EFTA’s total merchandise trade, 80% is covered by preferential trade agreements (EFTA-4, EU-27, 29 non-EU free trade partner countries).

Translations will be available here.