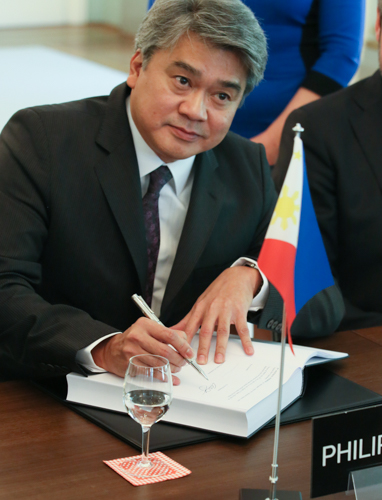 Adrian S. Cristobal Jr., Secretary of the Department of Trade and Industry of the Philippines.
Ministers and other Representatives from the Member States of the European Free Trade Association (EFTA) – Iceland, Liechtenstein, Norway and Switzerland – and from the Philippines signed a Free Trade Agreement (FTA) today in Bern, Switzerland.

The EFTA-Philippines FTA was signed by Adrian S. Cristobal Jr., Secretary of the Department of Trade and Industry of the Philippines, and by Johann N Schneider-Amman, President of Switzerland and Head of the Federal Department of Economic Affairs, Education and Research of Switzerland, Martin Eyjólfsson, Ambassador, Iceland, Aurelia Frick, Minister of Foreign Affairs of Liechtenstein; and Dilek Ayhan, State Secretary of Ministry of Trade, Industry and Fisheries of Norway.

Building on a Joint Declaration on Cooperation signed by the EFTA States and the Philippines in the Westman Islands, Iceland in June 2014, FTA negotiations were launched in March 2015 and concluded in February 2016.

The EFTA-Philippines FTA has comprehensive coverage, including trade in goods (industrial and agricultural goods, fish and other marine products), rules of origin, trade facilitation, SPS, TBT, trade in services, investment, competition, protection of intellectual property rights, government procurement and sustainable development. A Joint Committee will oversee the implementation of the FTA. The Agreement will enter into force after completion of the necessary internal procedures for ratification by the Parties.

The Representatives of both the Philippines and the EFTA States noted the close and significant economic relations between both sides. They underlined, that the signing of the FTA represented an important step in further strengthening this relationship. The preferential market access and the rules and disciplines governing the economic relations between the Parties under the FTA will supplement the economic cooperation and exchanges in the Joint Declaration on Cooperation, thus providing a stronger stimulus for the further development of trade and investment.

Economic relations between the EFTA States and the Philippines

With a combined population of over 13 million and a combined GDP of USD 1.2 trillion, the EFTA States are the world’s 9th largest merchandise trader and the 5th largest trader in commercial services, as well as significant actors in the area of foreign direct investment. They now have 27 FTAs with a total of 37 partners outside the European Union.

The Philippines as a trade partner

The Philippines is amongst the fastest and most resilient economies in Asia with over 100 million consumers. The Philippines ranks 37th in merchandise trade and 21st in commercial services trade. The Philippines has preferential trade agreements with the ASEAN Member States, Japan, China, Korea, Australia, New Zealand and India.

Details on the FTA  Agreement, including the legal texts, can be found at www.efta.int/free-trade/free-trade-agreements/philippines 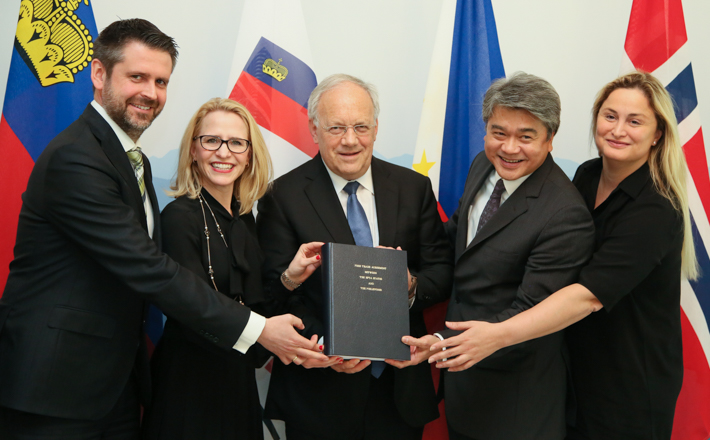