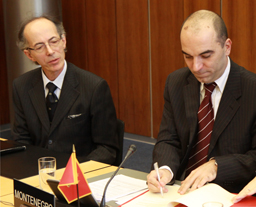 From left to right: Mr Ljubiša Perović, Ambassador, Permanent Mission of Montenegro, Geneva, and Mr Vladimir Kavarić, Minister of Economy, Montenegro.
Ministers from the Member States of the European Free Trade Association (EFTA) - Iceland, Liechtenstein, Norway and Switzerland - and Montenegro have signed a Free Trade Agreement (FTA) today. The FTA will further enhance the economic ties and promote trade and investment between the two sides.

The EFTA-Montenegro FTA was signed by Trond Giske, Minister of Trade and Industry of Norway; Einar Gunnarsson, Permanent Secretary of State of the Ministry for Foreign Affairs and External Trade of Iceland; Aurelia Frick, Minister of Foreign Affairs of Liechtenstein; and Johann N. Schneider-Ammann, Head of the Federal Department of Economic Affairs of Switzerland; as well as by Vladimir Kavarić, Minister of Economy of Montenegro.

Trade relations between the EFTA States and Montenegro build on a solid foundation, with a Joint Declaration on Cooperation that was first signed in 2000 with the former Federal Republic of Yugoslavia, which remained in force with Montenegro following its independence in 2006. The negotiations between EFTA and Montenegro were launched in March 2011 and concluded in July 2011.

While the FTA covers primarily trade in industrial goods, including fish, bilateral agreements on agricultural products between the individual EFTA States and Montenegro also form part of the instruments establishing the free trade area between the two sides. In other fields, the basis has been laid for agreeing on preferential rules in the future. A Joint Committee will supervise the functioning of the FTA, which will become effective after the completion of the necessary internal procedures by the Parties.

Merchandise trade between the EFTA States and Montenegro increased at an average rate of 92.9% between 2006 and 2010. In 2010, total trade between the two sides was valued at USD 14.1 million, with EFTA’s exports to Montenegro amounting to USD 13.3 million and imports reaching USD 0.8 million. EFTA’s main exports to Montenegro include pharmaceutical products, toys and sports requisites, while EFTA imports consist essentially of machinery.

With a combined population of around 13 million, the EFTA States are the world’s 11th largest merchandise trader, as well as significant actors in the areas of trade in services and foreign direct investment. They have now concluded 24 FTAs with a total of 33 partner countries outside the European Union.

Click here for other language versions of the press release (French, Icelandic, German and Norwegian)

Click on the image below to see more pictures from the signing.