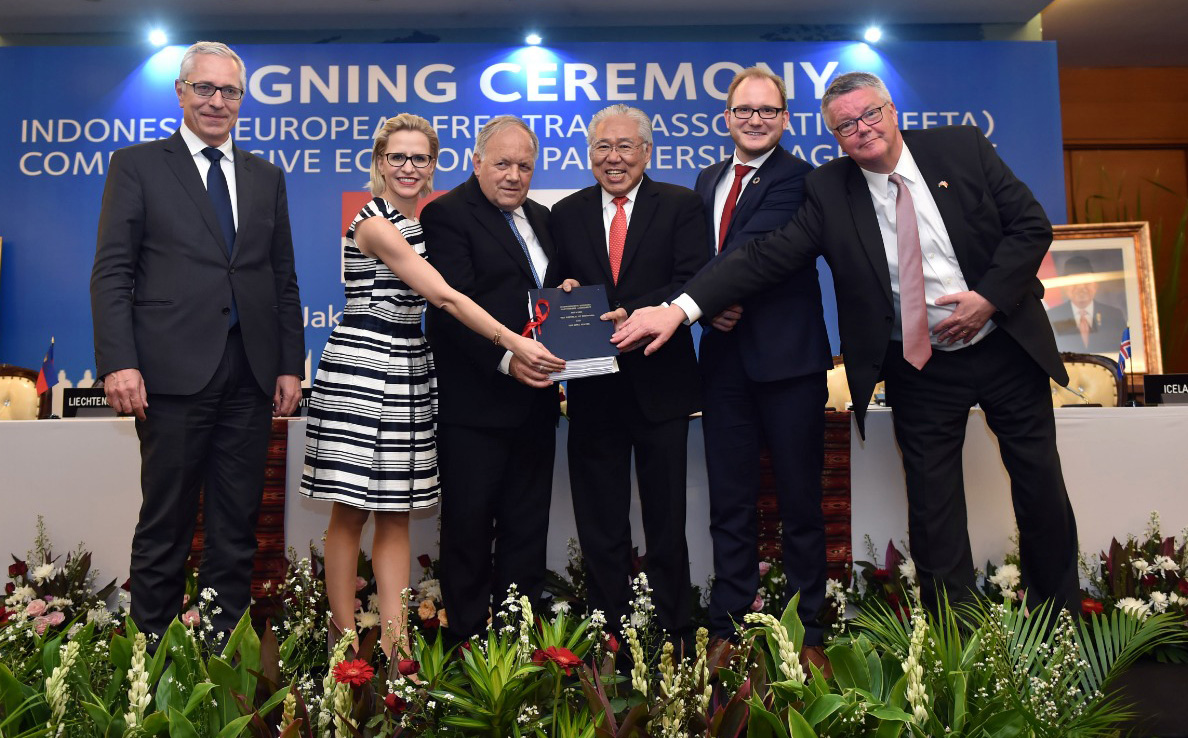 From left: Henri Gétaz, EFTA Secretary-General, Aurelia Frick, Johann N. Schneider-Ammann, Enggartiasto Lukita, Daniel Bjarmann-Simonsen, and Hannes Heimisson.
On 16 December 2018, Ministers and other representatives from the EFTA States and from Indonesia signed a Comprehensive Economic Partnership Agreement (CEPA) in Jakarta, Indonesia. The agreement will strengthen the economic ties and promote trade and investment between the two sides.

The EFTA-Indonesia CEPA was signed by Mr Enggartiasto Lukita, Minister of Trade of the Republic of Indonesia, and by Mr Johann N. Schneider-Ammann, Federal Councillor and Head of the Federal Department of Economic Affairs, Education and Research of the Swiss Confederation, Ms Aurelia Frick, Minister of Foreign Affairs of the Principality of Liechtenstein, Mr Daniel Bjarmann-Simonsen, State Secretary  of the Kingdom of Norway, and Mr Hannes Heimisson, Ambassador, Iceland.

The two sides previously signed a Joint Statement on 23 November 2018 in Geneva, Switzerland, marking the conclusion of the CEPA negotiations. The CEPA covers all areas normally included in EFTA’s comprehensive free trade agreements, such as trade in goods and services, investment, intellectual property rights, competition, government procurement, trade and sustainable development, cooperation and capacity building as well as legal and horizontal provisions.

The Agreement will provide access for major export products to Indonesia, from fish and marine products, agricultural and food industry products such as cheese, chocolates and coffee, to industrial and technical products, machinery and watches, chemicals and pharmaceuticals. It will also stimulate trade in services, e.g. for energy related services, telecommunication services, the financial industry or through access for maintenance personnel and provide an enhanced framework for trans-border investment.

At the signing, Minister Schneider-Ammann made a statement on behalf of all Member States thanking all Parties for their dedicated work throughout the negotiation process and the efficient work of the legal experts who have reviewed the texts to the Agreement.

“I am personally convinced that the CEPA is not only a good, but an excellent Agreement, a real landmark in the relations between our countries. I also take pride in EFTA being the first partner in Europe with whom Indonesia establishes free trade relations,” said Minister Schneider-Ammann.

“Companies from all four EFTA States are already active on the Indonesian market, which has been steadily growing over the past years. Indonesia is also a leading member of ASEAN and, by some forecasts, will become the fourth largest economy in the world by 2050. […] We are convinced that the strengthening of our economic ties through the CEPA will allow us to steadily make even better use of the potential by creating additional opportunities for both Indonesia and the EFTA States.”

Economic relations between the EFTA States and Indonesia
Merchandise trade between the EFTA States and Indonesia amounted to USD 2.3 billion in 2017. The EFTA States exported goods worth USD 597 million, with the leading exports being machinery and mechanical appliances, pharmaceutical products and mineral fuels. EFTA imported goods worth USD 1.7 billion in 2017, with gold as the most significant import, followed by footwear and electrical machinery.

EFTA as a trade partner
EFTA’s global network of preferential trade agreements outside the EU now consists of 29 agreements with 40 partners. Seven joint declarations of cooperation complement this network. Over 12 percent of EFTA’s total exports go to these trade partners and they are the source of 7.5 percent of EFTA imports. Excluding trade with the EU, EFTA’s FTA network now covers 24 % of EFTA exports and 21 % of EFTA imports. In 2017, EFTA’s global trade accounted for USD 766 billion, 43.5% of which was with countries outside the EU.

High-resolution photos from the signing.

Details on the FTA Agreement, including the legal texts.