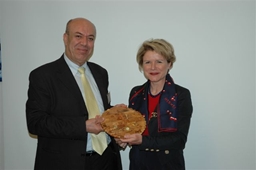 Mr Ziad Toame and Ambassador Marie-Gabrielle Ineichen-Fleisch.
The Joint Committee established under the Free Trade Agreement (FTA) between the EFTA States and the Palestinian Authority held its third meeting on 15 September 2010.

The Joint Committee discussed all the areas covered by the FTA, which has been operational since 1999. Delegations focused on the potential of further expanding trade relations between both sides, including through technical assistance. Total bilateral merchandise trade amounted to USD 26 million in 2009.

The parties adopted a decision introducing the Pan-Euro-Med Protocol of Origin into the Agreement, thus allowing the use of materials originating in the Pan-Euro-Med cumulation zone. They also agreed to follow up through a meeting of experts with the aim of further liberalising market access for agricultural products.

The Committee was chaired by Ambassador Marie-Gabrielle Ineichen-Fleisch of Switzerland, while Mr Ziad Toame, Director General of Trade, Industry and Consumer Protection in the Ministry of National Economy, acted as spokesperson for the Palestinian delegation.