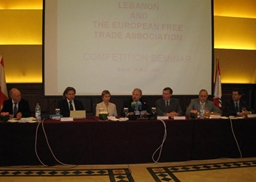 EFTA and Lebanon held a seminar on competition issues in Beirut for the benefit of Lebanese government officials and private sector representatives.

The Lebanese Ministry of Economy and Trade and the EFTA  Secretariat, with the support of experts from EFTA States, jointly organized a seminar on competition issues in Beirut on 19-20 May 2009. The seminar was opened by Lebanon's Minister for Economy and Trade, Mr Safadi, who presented his government's plans with respect to competition policy. For EFTA, the Norwegian and Swiss Ambassadors highlighted the relevance of modern competition frameworks and underscored the strong ties between the EFTA States and Lebanon.

The first day of the seminar focused on the history and general principles underpinning modern competition policy. There were also presentations on the legal and institutional frameworks in this field in Norway and Switzerland. On the second day, participants discussed the role of competition policy particularly in the banking, insurance and telecom sectors, with an emphasis on enforcement issues. On 21 May, the EFTA competition experts met with representatives from the Lebanese Ministry for Economy and Trade, further discussing issues of particular interest, including in regard of the draft Lebanese competition law.

The four EFTA States (Iceland, Liechtenstein, Norway and Switzerland) and Lebanon concluded a Free Trade Agreement in 2004. The Agreement has been in force since 1 January 2007.