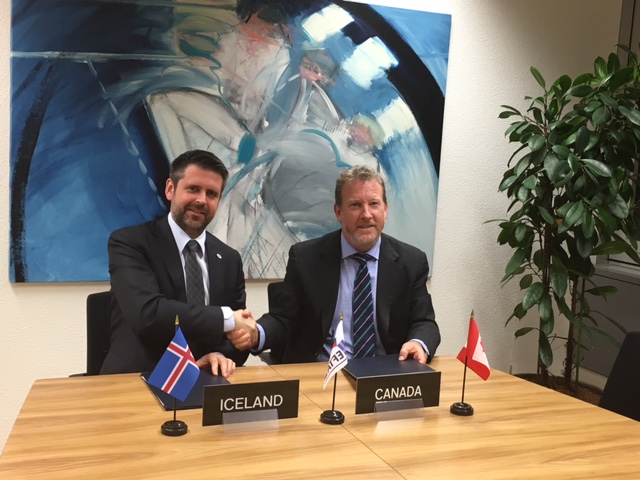 Ambassador Martin Eyjólfsson from Iceland and Mr Bruce Christie, Director General of the Intellectual Property and Services Trade Bureau, Global Affairs Canada
Delegations from the EFTA States and Canada convened on 26-27 April 2016 in Geneva for a first exploratory round on the possible modernisation and expansion of their existing free trade agreement. Ambassador Martin Eyjólfsson from Iceland acted as EFTA Spokesperson, and Mr Bruce Christie, Director General of the Intellectual Property and Services Trade Bureau, Global Affairs Canada was the Head of the Canadian delegation.
Overall both sides recalled that the functioning of the EFTA-Canada Free Trade Agreement (FTA) was effective and served operators from both sides well. Moreover and as discussed at past Joint Committee meetings, the Parties noted that there is potential to enhance the scope of the existing Agreement. This could include the possibility of extending the FTA to areas beyond trade in goods, such as trade in services, investment, government procurement, intellectual property, as well as trade and sustainable development. In this regard, the Parties referred to their latest FTAs with other partners and discussed their respective approaches. Areas already covered by the existing FTA (trade in goods including market access, rules of origin, trade remedies, technical barriers to trade, sanitary and phytosanitary measures and trade facilitation, as well as horizontal and institutional provisions) might also be reviewed and updated.
It was agreed that both sides will remain in close contact in order to further discuss and examine the possible expansion of the existing FTA.
EFTA-Canada merchandise trade was worth USD 7.2 billion in 2015, making Canada a significant trading partner for EFTA. Bilateral economic relations are also marked by substantial levels of trade in services and investment flows.
Share this
Email Facebook Twitter Google Plus LinkedIn