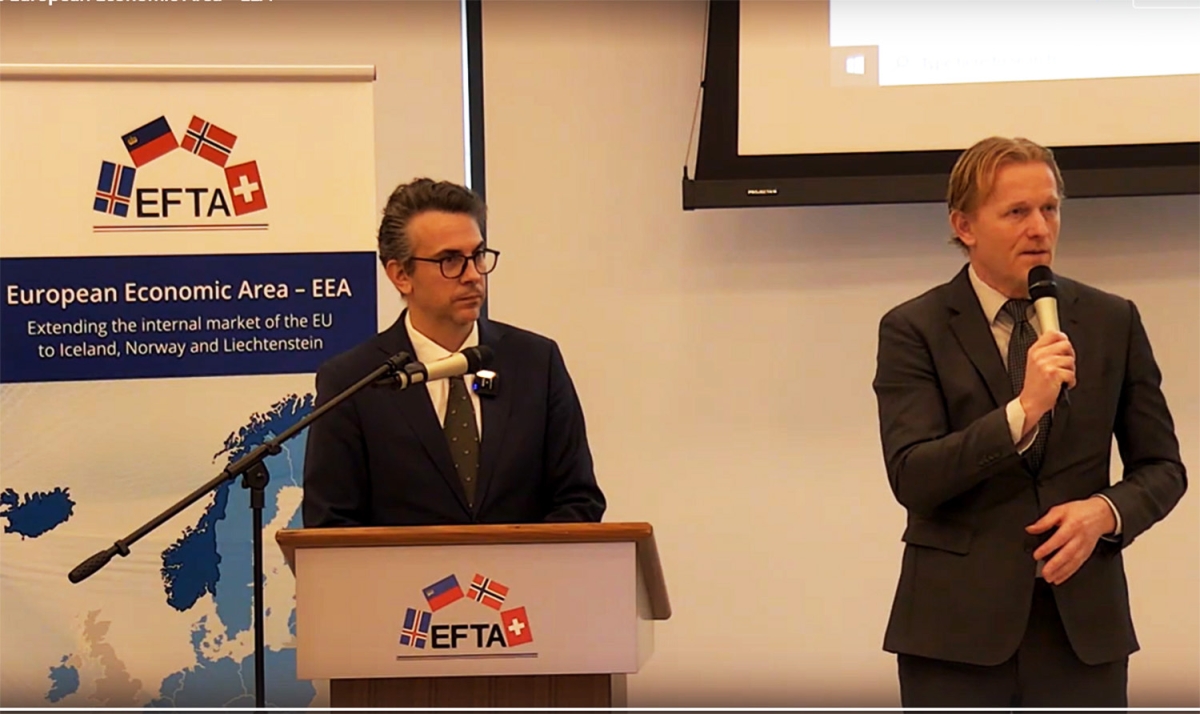 Pascal Schafhauser, Chair of EFTA Standing Committee, and Thorfinnur Omarsson, Head of Communications and moderator at the seminar.

On 18 February the second EEA Seminar to be held in EFTA House took place. Due to Covid restrictions, the seminar was held in a hybrid format, with around 30-50 attendees at EFTA House and over 150 watching the live stream. Attendees had a chance to ask the speakers questions, both online and in EFTA House.

The EEA Seminar is an opportunity for professionals both inside and outside the European Union to gain an understanding of the functioning of the EEA Agreement, with a special focus on how the three participating EFTA States – Iceland, Liechtenstein, and Norway – are integrated into the EU Single Market. It was split into three parts – EEA Incorporation, EEA Implementation, and Shaping EU Policies.

Pascal Schafhauser, Ambassador of Liechtenstein to the EU and Chair of the EFTA Standing Committee for the first half of 2022, then outlined the challenges and priorities of the EEA EFTA States. He also gave an overview of the priorities of Liechtenstein’s chairmanship of EFTA, such as outreach and information on the EEA.

“Ensuring that people understand the EEA Agreement and how it functions, and that those involved in the legislative procedures and the policymaking on the EEA EFTA and EU sides are as closely connected as possible, is important in order for us to work together in a smooth and effective way,” he said.

“For this reason, we will, for instance, launch a campaign called ‘We are the EEA’ (seeking to raise awareness on how the EEA Agreement contributes to the lives of EEA citizens) and invite top EU officials to an inauguration of this new building, EFTA House (as well as other meetings), in the coming months.”

As of January, the EEA files were transferred from the European Union External Action Service to the Secretariat-General of the European Commission. Therefore, for the first time, the EEA Seminar had a speaker from the Commission; Nicolas von Lingen, Head of Unit, who gave the perspective of the EU towards the EEA.

"It bears recalling how special this relationship is. We have seen it over the years because we have also developed relationships with other close partners on the European continent. For us, this agreement will remain a model - not a model that is necessarily replicable - but one that we are happy to nurture going forward,” Mr von Lingen said.

Finnur Þór Birgisson, Head of Legal Coordination at EFTA Secretariat, explained the ways through which EU law becomes EEA law, followed by a presentation by Kjell Leifssen, Head of Translation and Publication, about various EEA publications and information sources.

Melpo-Menie Joséphidès, Director of Legal and Executive Affairs at the EFTA Surveillance Authority (ESA), started the second part of the seminar, EEA Implementation. She told attendees about how EEA law is incorporated and the monitoring tools of ESA. Ólafur Einarsson, Registrar at the EFTA Court in Luxembourg, gave insights into how EEA law is interpreted and how the court functions. They replied jointly to questions, mostly on how infringements are handled by ESA and possibly later by the EFTA Court.

Eva Honningsvåg, Head of Communication at the Financial Mechanism Office, explained how the EEA & Norway Grants help to reduce economic and social disparities in the EEA and strengthen bilateral relations between the EEA EFTA States and the 14 beneficiary countries.

Tore Nyvold Thomassen, Senior Officer in EFTA’s Internal Market Division, started the third and final part of the seminar, Shaping EU Policies. He explained the vital role of EEA EFTA Comments in shaping decisions made by the EU.

Then, Christophe Zufferey, Officer to the EFTA Parliamentary Committee, explained the role of the EFTA advisory bodies: parliamentarians, social partners, and local/regional representation in the EEA.

The final speaker at the EEA Seminar was Marius Andersen, Deputy Director of the EFTA Statistical Office in Luxembourg who went over statistical cooperation with the EU statistical office Eurostat which now spans more than three decades.

Links to the presentations can be found below:

Functioning of the EEA Agreement and the Role of the Secretariat - Marit C. Schage Andria, Director of EFTA Internatl Market Division - Watch on Youtube

Challenges and priorities in the first half of 2022 - Pascal Schafhauser, Chair of EFTA Standing Committee - Watch on Youtube