Thirty-ninth meeting of the EEA Council 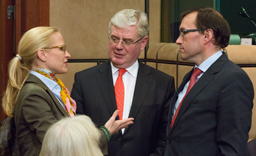 The EEA reviews and the functioning of the EEA were among the topics discussed by the EEA Council when it met in Brussels on 21 May 2013. Recent developments in financial services, including a banking union and the Single Supervisory Mechanism, were also debated.

The EEA Council welcomed the EEA reviews undertaken in 2012 and 2013, and noted that they found the EEA Agreement to be a durable and well-functioning instrument, which had comprehensively extended the EU's Internal Market to the EEA EFTA States while at the same time ensuring its integrity.

Welcoming the extensive and far-reaching economic relations of the soon-to-be 31 countries covered by the EEA Agreement, the EEA Council acknowledged the important role played by the Agreement in ensuring the development of this strong trade relationship over the last 20 years. The Council looked forward to deepening relations with a view to improving market access for the mutual benefit of all EEA partners.

The EEA Council reaffirmed the need for responsibility and solidarity among the European countries in tackling the current economic crisis, and noted the importance of renewed and sustainable growth in the European Economic Area. In this regard, the Council welcomed the increased emphasis on competitiveness and growth measures in the Multiannual Financial Framework 2014-2020, and underlined the significance of the EEA and Norwegian Financial Mechanisms as a means of reducing economic and social disparities in the EEA. The parties also recognised the importance of the EU programmes in building a more competitive Europe, and encouraged the timely inclusion of the EEA EFTA States in relevant programmes.

With regard to the issue of outstanding legal acts, the EEA Council welcomed the ongoing joint efforts that had been made to further improve the incorporation process.

The EEA Council looked forward to Croatia’s accession to the European Union on 1 July 2013 and the forthcoming enlargement of the EEA.

Link to the EEA Council Conclusions.

Click here for high resolution pictures from the meeting.