Thirty-eighth meeting of the EEA Council in Brussels 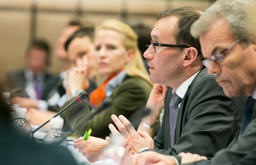 The thirty-eighth meeting of the EEA Council took place in Brussels on 26 November 2012. In light of the 20th anniversary of the Single Market at the end of this year, the EEA Council recognised with satisfaction that the EEA Agreement has been a durable instrument in ensuring the smooth functioning of the European Economic Area. The EEA Council held an orientation debate on Trade and Regulatory Cooperation with EEA Neighbours.

The EEA Council recognised that the current economic crisis was a common concern, and reaffirmed the need for responsibility and solidarity among the countries of Europe in tackling the challenges ahead. The parties noted the urgency to continue discussions between the EU and EFTA sides on how to ensure that the significant volume of legislation being adopted in the EU in the financial services field is dealt with and included in the EEA Agreement.

The EEA Council also encouraged the parties to continue efforts to reduce the number of outstanding legal acts.

Furthermore, the EEA Council reiterated the importance of maintaining close cooperation between the EU and the EEA EFTA States in environment, energy and climate change polices. The importance of cooperation for the development of future-oriented energy technologies was also underlined.

The EEA Council looked forward to the upcoming review in 2013/14 of the conditions of trade in agricultural products between Norway and the EU with a view to open negotiations within the framework of Article 19.

Link to the EEA Council Conclusions.

Click here for high resolution pictures from the meeting.