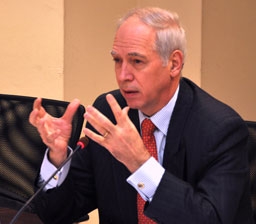 The EFTA Standing Committee and the EEA Joint Committee met on 9 and 10 December 2010, respectively. In the Standing Committee the EEA EFTA States prepared for the Joint Committee, the Icelandic Chair Work Programme final report of the second half of 2010 was presented and the Norwegian Chair Work Programme for the first half of 2011 was introduced. Swiss Ambassador de Watteville gave a briefing on current developments in Swiss-EU relations.

In the Joint Committee meeting, 13 decisions incorporating 20 legal acts were adopted, some of which are explained further in separate news items on the website. Delegates also received a briefing by the European Commission on the Single Market Act. In addition, the EEA EFTA States raised the issue with the Commission of intervention by the EEA EFTA States and the EFTA Surveillance Authority before the European Court of Justice. Finally the EEA EFTA delegates said farewell to their colleague on the Commission side, Lars Olof Hollner, and the Commission did the same to Ambassador Stefán Haukur Jóhannesson, who is leaving his post to become Iceland´s chief negotiator in the upcoming accession negotiations with the EU.

The main focus of the Norwegian Chair during the first half of 2011 will be to ensure efficient incorporation of pending and new legislative acts in order to safeguard the good functioning and homogeneity of the EEA Agreement, to follow the implementation of the Lisbon Treaty and its impact on the EEA Agreement, and to finalise the implementation of the EEA and Norwegian Financial Mechanisms 2009 – 2014.

The Norwegian Chair Work Programme for the first half of 2011.