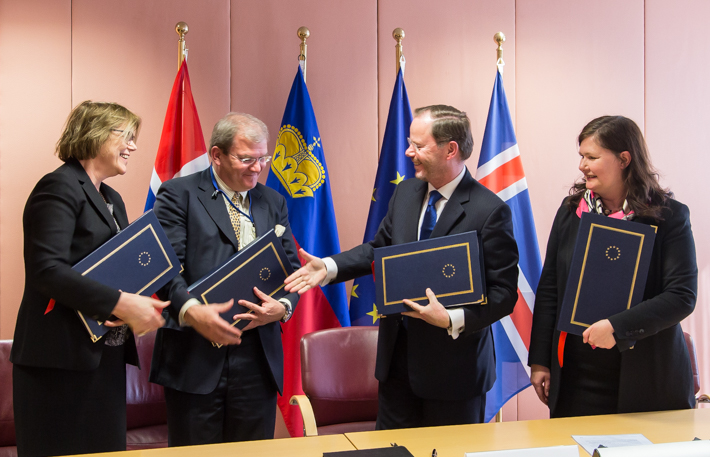 The EEA EFTA States Iceland, Liechtenstein and Norway have signed the new agreements with the EU on the Financial Mechanisms for the period 2014-2021.
On 3 May, the Ambassadors of the EEA EFTA States to the EU, Ms Bergdís Ellertsdóttir (Iceland), Mr Kurt Jaeger (Liechtenstein) and Ms Oda Helen Sletnes (Norway), as well as Ambassador Pieter De Gooijer from the Netherlands Presidency of the Council of the EU, on behalf of the EU, signed the Agreement on an EEA Financial Mechanism for the period 2014-2021. The Agreement between Norway and the EU on the Norwegian Financial Mechanism for the same period was also signed.
The Financial Mechanisms, more commonly known as the “EEA Grants” and “Norway Grants”, will make a significant contribution towards reducing social and economic disparities in the European Economic Area and strengthening bilateral cooperation between the Donor and the Beneficiary States.
The new Grants represent the most ambitious effort by the EEA EFTA States to date, with a total commitment of EUR 2.8 billion (EUR 1.5481 billion through the EEA Grants and EUR 1.2537 billion through the Norway Grants) over a seven-year period.
The support is divided into two schemes: the EEA Grants, funded by Iceland, Liechtenstein and Norway, amounting to EUR 221.16 million per year; and the Norway Grants, funded solely by Norway, amounting to EUR 179.1 million per year.
The EEA EFTA States will give priority to supporting efforts in the areas of innovation, research and education. Energy security, climate change and greater cooperation in the area of justice and home affairs will also be key areas of support. At the same time focus on strengthening civil society and fundamental rights is maintained.
A new fund for regional cooperation has also been established, a large proportion of which will be used to promote sustainable youth employment. The seven- year period allows better time for implementation.
Negotiations will now commence between the EEA EFTA States and each of the 15 Beneficiary States on a Memorandum of Understanding specifying the set of programmes to be implemented.
Bilateral agreements were also signed between Iceland and the EU, and between Norway and the EU, on further improving market access for fish.

Agreement between the European Union, Iceland, the Principality of Liechtenstein and the Kingdom of Norway on an EEA Financial Mechanism 2014-2021 (provisional version)

High-resolution photos from the signing event.
EEA and Norway Grants

From left: Ms Ambassador Oda Helen Sletnes, Mission of Norway to the EU; Mr Kurt Jaeger, Mission of Liechtenstein to the EU; Ambassador Pieter De Gooijer, Netherlands Presidency of the Council of the EU: and Ms Bergdís Ellertsdóttir, Mission of Iceland to the EU.
Share this
Email Facebook Twitter Google Plus LinkedIn